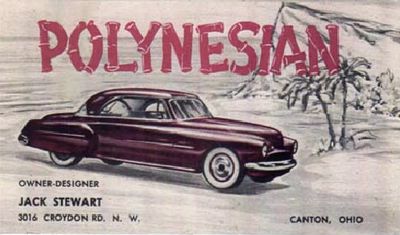 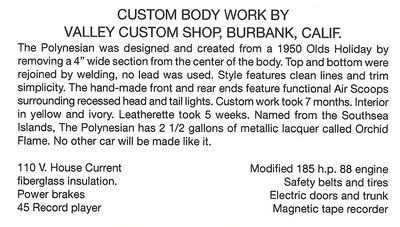 The back of Jack's business card. 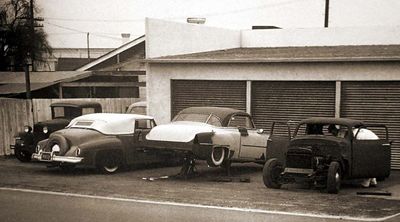 Jack's Oldsmobile next to Tommy Jamieson's 1941 Lincoln Continental outside Valley Custom in 1952 or 1953. 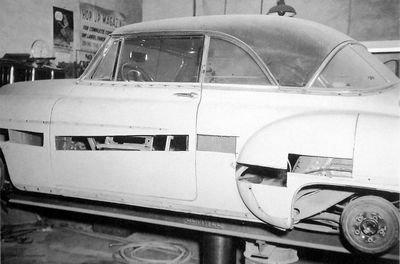 Construction photos during the sectioning job. 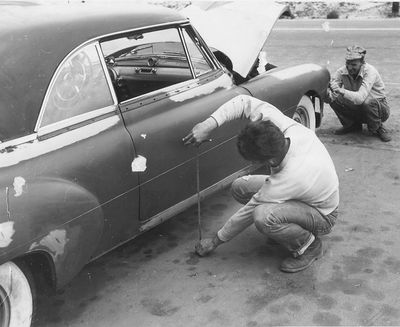 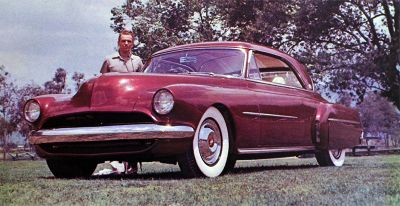 The first version of the Polynesian as it appeared in 1953.[2] 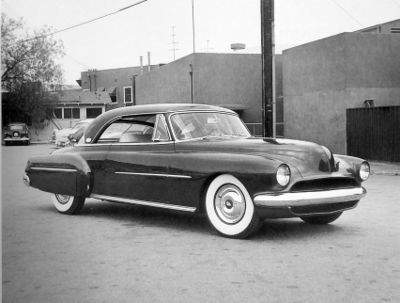 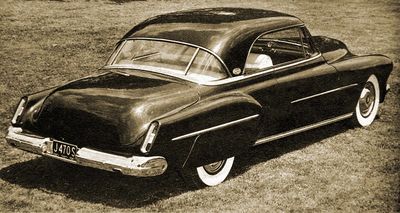 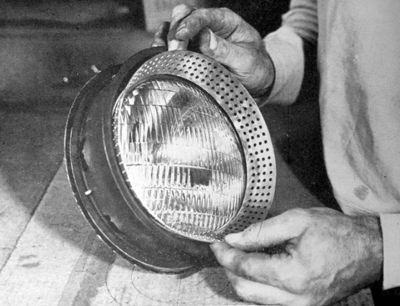 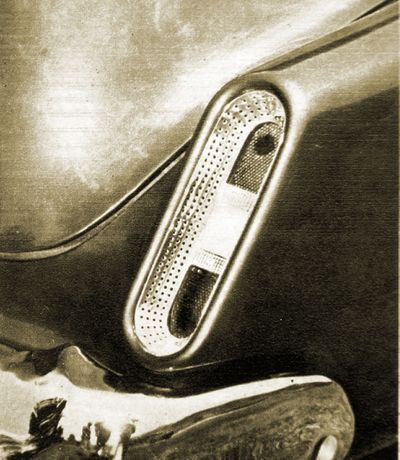 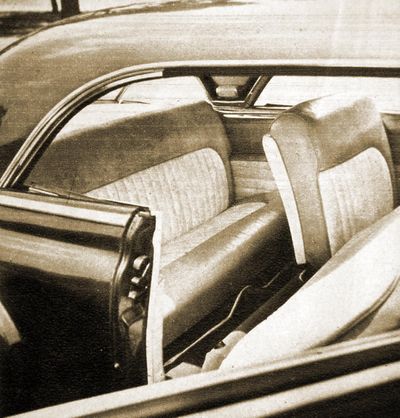 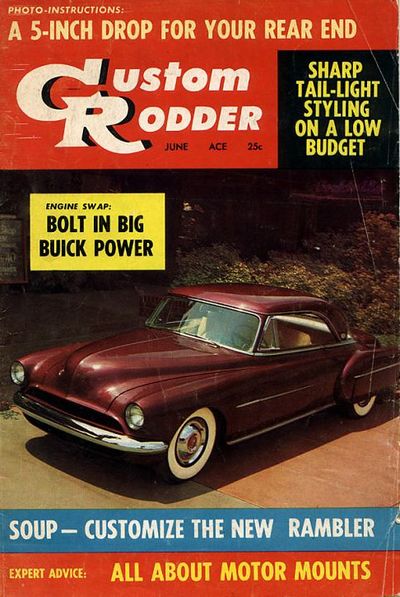 The Polynesian at the cover of Custom Rodder June 1958

The Polynesian as it appeared in Custom Cars December 1958 after John Zagray had Kurkle’s Body Shop update the car. Photo by George Barris 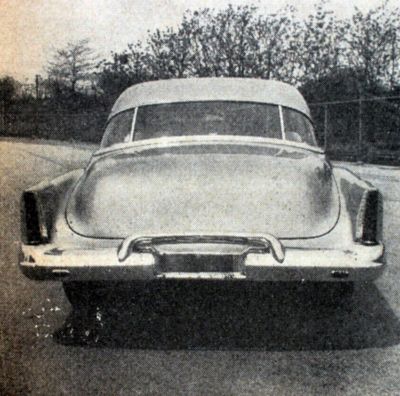 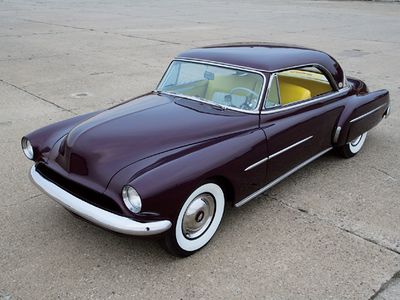 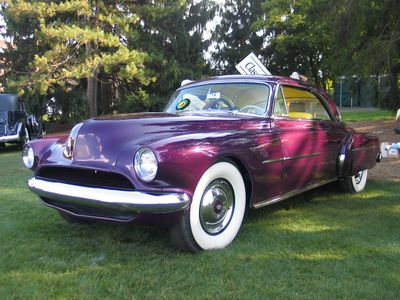 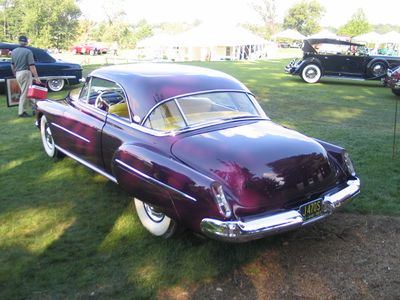 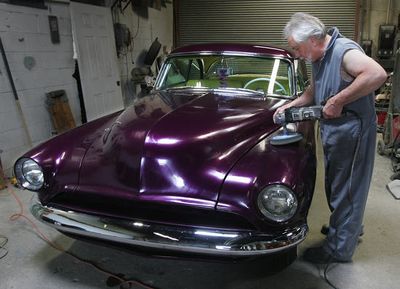 Gene Blackford shines up the Polynesian before he sends it off to California in 2009. Photo by Phil Mastruzo. 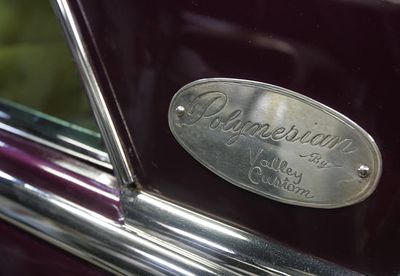 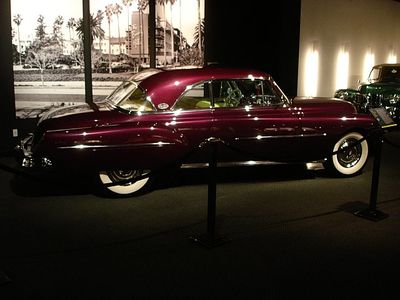 The Polynesian at the Peterson Automotive Museum Los Angeles, California in October 2009. Photo by Harold Dzierzynski 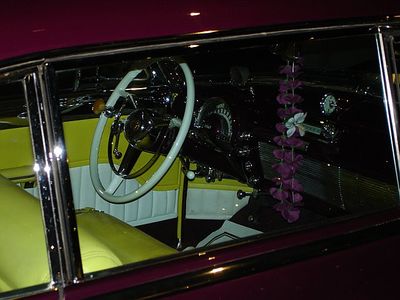 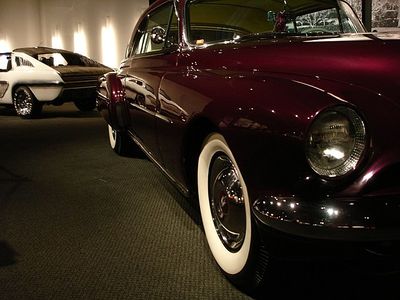 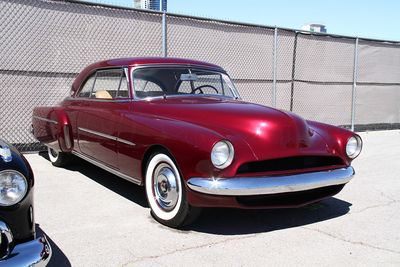 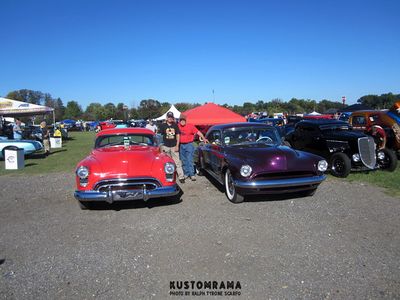 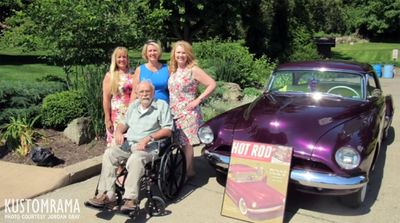 In 2017 Jack was reunited with "The Polynesian" at a Gazebo dedication in North Canton. A few months later he passed away. Photo courtesy of Jordan Gray.

1950 Oldsmobile Holiday 88 restyled by Valley Custom Shop for Jack Stewart of Canton, Ohio. Jack's Oldsmobile is also known as the "Polynesian" after its orchid flame purple paint job.[4] Jack designed the overall look of the car himself while he was stationed in California, as he served in the US Air Force. In 1952, while on leave from the Air Force, Jack bought a stock Oldsmobile and began to look for a shop that could restyle his dream car. After visiting three different shops, Jack decided to let Valley Custom take care of the transformation.[5]

According to an interview with Neil Emory from 1990, Jack Stewart had just returned from military service in the early 1950s when he saw Ron Dunn's sectioned 1950 Ford at the Motorama show in Los Angeles. Stewart talked to Neil Emory and Clayton Jensen about giving his Oldsmobile a similar treatment. Unlike most customers of the day, Stewart didn't want to fool around and have the headlights frenched one month, the taillights done the next month and so on. He wanted the whole car customized, start to finish, at one time. He was the type of customer most shops dreamed about.[3] At Valley Custom Jack's original sketches were fine tuned and slightly changed. Jack wanted a chopped top, but Emory and Jensen convinced him about leaving the top unchopped.[5]

During the next 9 months Jack's Oldsmobile received a full custom treatment.[3] The body was sectioned 4 inches. The main body panels were sectioned first. After that the front fenders where modified and reattached. New front wheel openings were also fabricated on the sectioned fenders. The rear fenders were reshaped and raised in order to flow with the trunk.[6] Functional air scoops were grafted on to the rear fenders to cool air down the brakes. The rear fenders were also fit with fender skirts made from sheet metal. The fender skirts were first made in cardboard, making sure the shape was right.

The car was nosed, decked and shaved of its door handles. The doors were electrically operated by solenoids. Up front new headlight housings were made out of round rod. The taillight housings were reworked to fit 1947 Studebaker taillights. Both headlights and taillights were tunneled, frenched and fit with chrome plated drilled rims. The taillights were recessed so deeply into the rear fenders that they were not visible from the side of the car like on a stock automobile. Neil solved this problem by adding small round lights frenched in to the sides of the bumper ends.[5] The stock rear bumper was kept, but the center section was fit with a recessed custom-made centerpiece that housed the license plate. Small lights were mounted in the bumper to light the license plate at night.[6] The exhaust was also routed through the rear bumper. A new grille opening was made using round tubing. A cleaned and reworked 1947 Oldsmobile rear bumper was fit in the middle of the grille opening. New holes for the side trims were made. Emory and Jensen were true craftsmen, preferring to hammer-weld and metal-finish the body panels rather than slather on lead filler. Very little lead was needed before the metallic orchid paint was applied. Neil mixed a custom color for the car named Orchid Flame. The total restyling job done by Valley Custom costed Jack $1800. Jack paid Wayne Tipton of Burbank, California $450 to upholster the interior of the car in ivory and Citron white rolled and pleated Naugahyde. Wayne also made the carpets and matching headliner.[5]

Under the hood, the stock engine was souped up with 1952 Oldsmobile heads, valves and rocker arms. A Rochester four-barrel carburetor and headers were also fit on the engine. Only hours after the car was finished, Jack picked it up up and displayed it at the 1953 Detroit Motor Show.[5]The construction of the car was thoroughly documented in a series of how-to-stories published in Rod & Custom September 1953, Hot Rod Magazine September 1953 and Trend Book 109 Custom Cars 1954 Annual.

Back in Canton, Ohio Jack used the Oldsmobile as regular transportation. The car even served has his wife's car until she became pregnant and couldn't fit behind the wheel.[3] After driving the Polynesian for several years, Jack ended up selling it to John Zagray, also from Canton. John had Kurkle’s Body Shop update the car. In Custom Cars December 1958 there is a featured story on John's version of the car. By then the car had been painted metallic green; it had received fins fit with 1957 Plymouth taillights. In the rear, the bumper has received a license plate guard. Additional grille bars, side trim and new hubcaps had also been added to the car.[7] By the early 1960s, the Polynesian disappeared from the scene.[3]

In 1971 Gene Blackford, the owner of the Red Lacquer Room body and restoration shop of Cuyahoga Falls bought the remains of the Polynesian from Warren Wise of Robertsville, Ohio. Warren, who was the 6th owner of the car, had stored the Polynesian in a barn. Gene had heard rumors about the whereabouts of the car at a New Years Eve party, and called Jack Stewart to further investigate the case. Jack told him that he had sold the car to John Zagray. He called John, who gave him the name of the next owner, who gave Gene another name, and so on. The last guy on the list, a man named Stark, did not have a phone number, but did own a body shop in a rural area near Canton. Gene went there one Sunday and tracked him down. Stark said he had sold the car to a local named Warren Wise and helped Gene call him so he could ask the fateful question: "Can I see it?"[3]

The car was in a terrible shape, but Gene had to have it, so he bought it from Warren for $1,000. In the summer 1953, after Jack had driven the Oldsmobile back to Canton, Gene happened to see the car for the first time at the Portage Lakes resort area near Akron, Ohio. He was 12 years old at the time and it was love at first sight. A crowd of people had gathered near a roadside custard stand, and Gene walked over to check out what the commotion was all about. Someone in the crowd asked what it was, and another one answered: "A California custom". When Gene got the car it was surprisingly complete. It was rusted out at the floor boards and the driver's side door and rear quarter still suffered from poorly repaired collision damage. Surprisingly, the original taillight openings were still intact under the fins, and Zagray called to say he had the original taillight bezels stashed away in a box.[3] After buying the car, Gene stored the car for 33 years. In 2004 Gene and six friends decided to restore the Polynesian back to the Ohio version Gene had fallen in love with in 1953. After 9 months of hard work the restored version of the car debuted at the 2005 Glenmoor Country Club Concours in Canton, . Gene and his friends worked day and night to get the car ready, and at the same day as the show opened they painted the car. The bright interior was upholstered in lemon yellow and eggshell white. The colors were matched to remnants of the original upholstery that was still in the car when Gene got it. The car won the 2005 Glenmoor custom car award and then captured the Preservation Award at the 2006 Detroit Autorama.[4]

In 2009 Gene drove the car to Los Angeles in order to exhibit the Polynesian at the Peterson Car Museum. The car was on display there from June through February 2010.[4]

In 2011 The car was on display at the Viva Las Vegas Rockabilly Weekender car show. Click here to see photos shot by Ray the Rat.

Please get in touch with us at mail@kustomrama.com if you have additional information or photos to share about Jack Stewart's 1950 Oldsmobile.