From Kustomrama
(Redirected from Joe Brienza)
Jump to: navigation, search 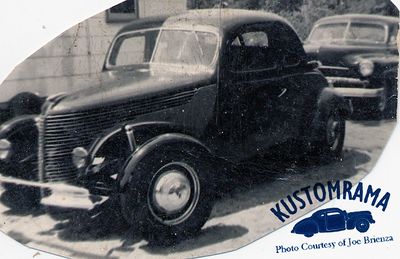 A 1937 Ford coupe, with a 1938 Ford front, that Joe built from parts he had around the yard; "This was just a fun car. I was about 15 years old and raced it around the woods. I wound up hitting a telephone pole making a power turn in the woods." While Joe ran the stock fenders in the back, motorcycle type fenders were installed up front. Photo courtesy of Joe Brienza. 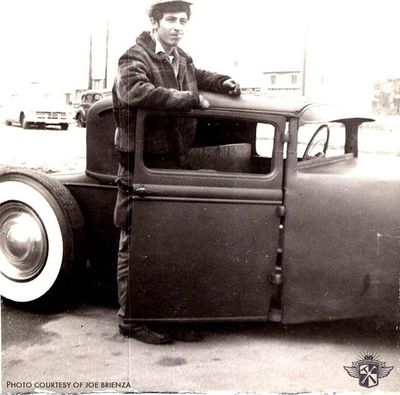 Joe at age 18, with his first hot rod, a stretched 1929 Ford Model A Coupe. Photo from The Joe Brienza Photo Collection. 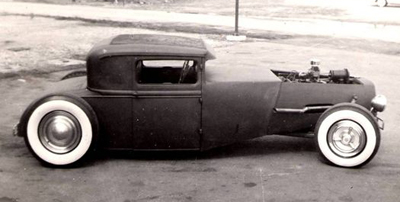 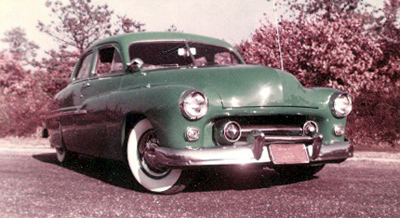 Joe Brienza's 1949 Mercury of West Islip, New York. Joe bought the Mercury in 1951, and it didn't take long time before he restyled it. 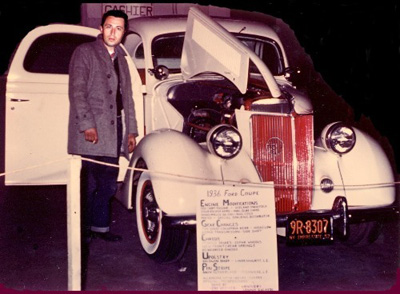 Joe Brienza's 1936 Ford 3-Window Coupe was restyled in 1956. Joe traded the coupe even for his customized 1949 Mercury. He bought the coupe after he had sold the Model A. He sold the Model A without the Cadillac engine, so it didn't take long before the '36 was Cadillac powered. 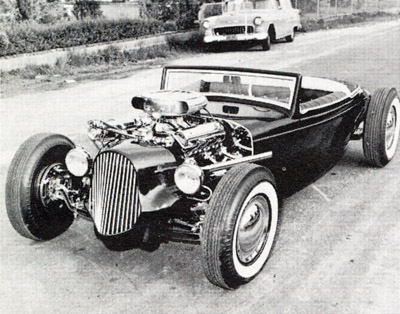 Joe Brienza's 1934 Ford Convertible. Joe started the build in 1957 and completed it in 1958. The build took almost two years. 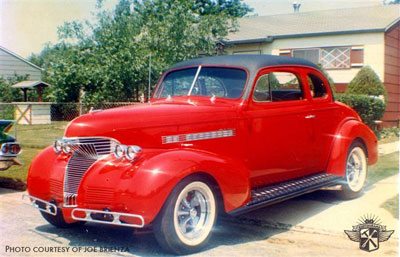 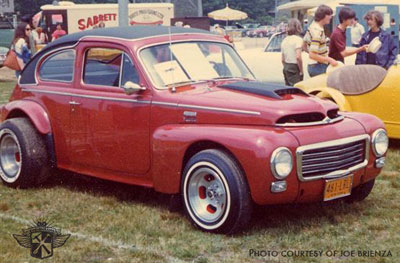 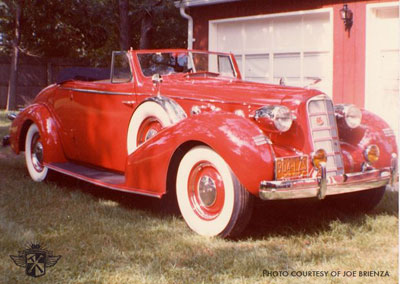 Joe Brienza's 1935 LaSalle Convertible. After the Volvo, Joe bought a burnt out LaSalle that he restored and restyled into an award winning car. 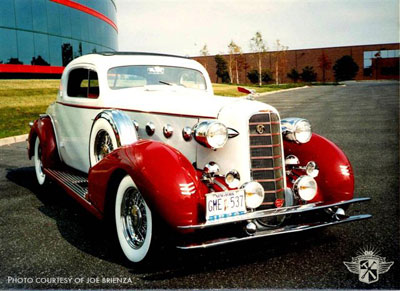 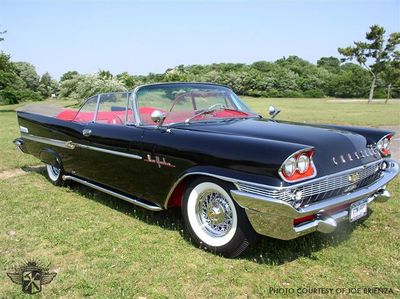 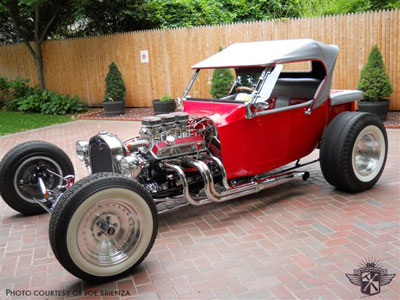 Joe Brienza's 1923 Ford Model T Roadster Pick Up. In 2010 Joe decided to build another hot rod. This build was based on a fiberglass 1923 Ford roadster pick-up body. 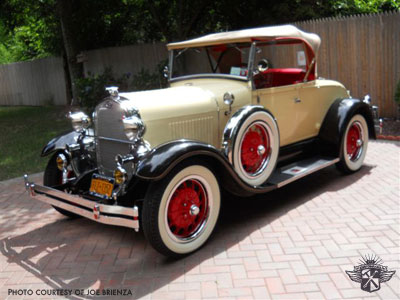 Joesph "Joe" Brienza of West Islip, New York. Joe bought his first car, a 1929 Hudson coupe, around 1949/1950 . He was 13 years old at the time, and he had to pay 15 bucks for the old car. The Hudson was in a good shape, and Joe just did ards and ends on it. There were few houses were Joe lived, and hardly any cops, so he used to drive the Hudson to school and park it around the corner so no one would see him.

In 1951, Joe bought a 1949 Mercury that he installed a 1948 Cadillac flathead in. The Mercury went trough many stages, and after 6 months, Joe swapped the Cadillac flathead for a quicker 1950 Oldsmobile engine. In 1954 Joe bought a 1929 Ford Model A coupe and a 1948 Mercury chassis that he turned into a ratty hot rod. The quarter windows were filled in, and the top was chopped 4 inches before Joe channeled the body 10 inches over the frame. Because of the long Mercury chassis, Joe decided to extend the cowl. Power came from a 1951 Cadillac engine that was hooked to a LaSalle tranny and a 1941 Cadillac rearend. The build took around 6 months. It was a fun car to ride around in, but as Joe didn't like "rat rods", he sold the coupe and traded his 1949 Mercury for a 1936 Ford 3-Window Coupe in 1956. He sold the Model A without the Cadillac engine, so that went in to the 3-Window Coupe as soon as Joe got the '36 home. The engine was hooked to a Lincoln side shift tranny, and a 2 speed Columbia rear end. After the 3-Window coupe followed an Oldsmobile powered 1949 Mercury, a 1929 Ford pickup, a 1934 Ford 5-Window coupe, a 1937 Ford, another 1937 Ford with a 1938 Ford grille, a 1937 Lincoln Zephyr and a 1951 Ford Victoria. In 1957 Joe bought a 1934 Ford Convertible. He found the car as a beaten down stocker in a horse barn. The convertible was filled with horse manure up to the dashboard, and the farmer sold it to Joe for $35. Joe spent the next two years, working six hours a night, seven days a week on the car. After Joe had invested more than 1,500 hours in the car, the old Ford had been turned into a trophy winning show car named "The Brienza Special". The Brienza Special landed the cover of Custom Rodder December 1958 shortly after it had been completed. It went on to gain national recognition after it landed the cover of Hot Rod Magazine August 1959. The interior of the Brienza Special featured hidden stitch tufts and buttons. The rug consisted of real white bear skin. The upholstery was done by Baldwin Auto Upholstery. At the time Joe built the car and took it to the upholstery shop, he worked as an automobile mechanic. At the upholstery shop the owner of the shop was so impressed with the car that he offered Joe a job, telling him he would learn him the trade. Joe figured that he would rather do custom upholstery than crawl all over the ground full of grease, so he accepted the job. After building the '34, Joe was asked if he wanted to join the Bay Buggies hot rod club. They kept begging until he coined, and became a member.[1]

After the '34, Joe customized a 1939 Chevrolet that he called The Brienza Special No. 2. The Brienza Special No. 2 was powered by a 400 Buick Nailhead engine, and as the '34, the '39 took many awards before Joe sold it to a guy in Kuiwait. After the '39, followed a 429 Cadillac powered 1960 Volvo. The little Volvo weighted only 1900 punds, so with a stock engine ut turned in low tens at the track. The Volvo was sold off, and Joe bought a burnt out 1935 LaSalle. The LaSalle had a history, and was originally customized in the early 1940s. After two years of hard and dedicated work, Joe had turned the LaSalle into an award winner as well.[1]

Joe worked at Baldwin Auto Upholstery for 10 years. After 10 years he quit and went to work for Grummans Aircraft Company. At Grummans he upholstered airplanes. He was also making the backpacks for the astronauts. When the astronauts returned from the first moon-landing, Joe had the job of repairing the backpacks. Joe worked for Grummans for 5 years. After that he went into his own business with his brother. He worked with his brother for 10 years before he built a 6 car garage in his backyard. In the new garage, Joe worked with his wife for 24 years.[1]

In 1986, Joe bought, restored and restyled another LaSalle, a 1934 LaSalle Coupe. Joe found this one in New Jersey. It was kept in a trailered body, and ut had bullet holes in the right rear panel and fender. In 2012 Joe decided it was time to build another hot rod. This time a fiberglass 1923 Ford Model T Roadster Pick-Up. In 2012 Joe was working on a Pinto powered 1980 Shay reproduction 1929 Ford Model A Roadster.

Please get in touch with us at mail@kustomrama.com if you have additional information or photos to share about Joseph Brienza.