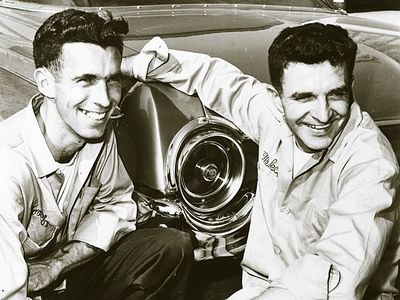 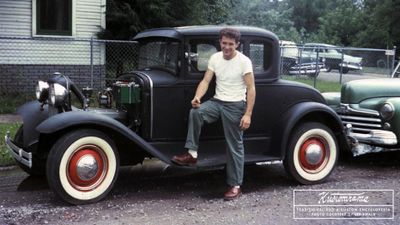 Mike posing next to their 1931 Ford Model A Coupe. This photo was taken by Lee Ewald or his buddy Walter Young. Lee lived on the next block over from Larry, in the Brightmoor section of Detroit. "My street was Blackstone, and that second garage they worked in was on Westbrook," Lee told Sondre Kvipt of Kustomrama in 2014. The photo was taken on the side street of Westbrook and Eaton. "The garage where they worked would have been behind the house and to the left of the photo." Lee recalled Mike and Larry driving the coupe around the neighborhood. "I loved seeing that car driving around, and it prompted me to buy a Model A and fix it up." The car was in gray primer when Lee shot it, but he recalled that it was painted metallic green in the garage not long after he took the photo. The two-tone 1956 Ford in the street belonged to Lee's dad, and Lee drove it over to their place that day. Photo courtesy of Lee Ewald. 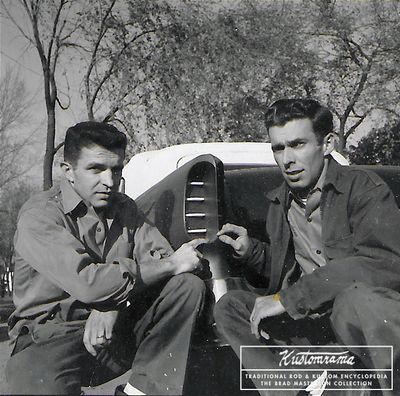 A photo of Mike and Larry from The Brad Masterson Collection. 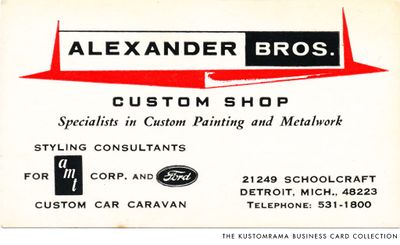 Alexander Bros. Custom Shop - Specialists in Custom Painting and Metalwork. Styling consultants for AMT Corporation and Ford Custom Car Caravan. This card was donated by Lee Bailey, and it was given to him by Mike and Larry Alexander when he did an article on their custom shop for his high school newspaper in 1962. Photo from The Kustomrama Business Card Collection. 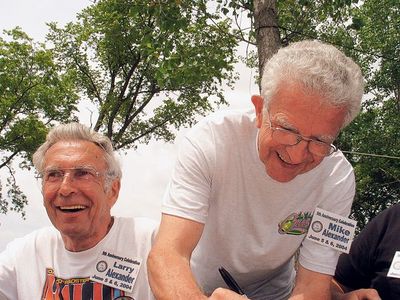 Larry Alexander and Mike in 2004. Photo courtesy of Custom Rodders.[1] 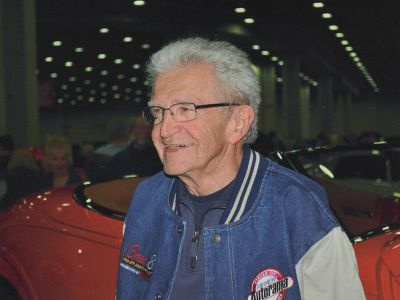 Michael P. Alexander (08.29.1933 - 07.18.2014) was born in Detroit, Michigan. He was the fourth of four brothers, and together with his elder brother Larry Alexander he formed the duo the Alexander Brothers. Mike was the mechanic one of the duo, and had always tinkered with cars. 15 years old he bought his first car a 1932 Ford 3-Window Coupe. He didn't keep it long as i traded it for a 1941 Ford Coupe.

In 1952 Mike joined the army. After his discharge in 1954 Larry convinced Mike to study bodywork and paint theory under the GI Bill. After that the brothers began to work in hteir father's one-car garage after hours, shaving trim, filling holes, and doing regular repairs.

July 28, 1956 Mike married his wife Elaine.[2] Larry's burgeoning family prompted him to buy a house, and the brothers quickly reestablished the shop in its two-car garage. At one point they realized the work coming in was enough to sustain a full-time endeavor, so in 1957 they quit their day jobs and concentrated on growing their business. In 1957 Mike and Larry opened up the Alexander Brothers Custom Shop on Northwestern Highway near Evergreen Road in Detroit.

In 1968, after loosing their shop for the second time due to highway expansion Larry decided to start a straight job at Ford. Mike kept the shop going with Ken Yanez as the city planned its highway. Once the city razed the shop in 1969 Mike also found legit work. When Bunkie Knudsen left GM to run Ford he brought Larry Shinoda with him. Larry Shinoda hired Mike to run the Kar Kraft Design Center. The job was short lived, and in 1970 Mike transferred to Heinz Pretcher's American Sunroof Corporation. The company started a new division called Custom Craft Division. Mike worked for Custom Craft Division for 25 years, and he became Vice President of the company.[2]

Please get in touch with us at mail@kustomrama.com if you have additional information or photos to share about Mike Alexander.