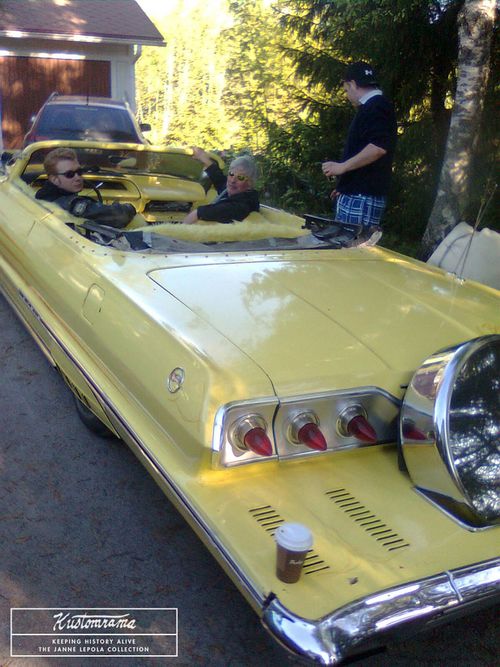 A photo of Janne in The Banana Split, a 1963 Chevrolet custom that had a big influence on him when he was a little boy. The car started out as a four-door. Built by Ari Lattunen in the early 1990s, the guy in the passenger seat, Harri Salakoski, has been the owner since 1993. Photo courtesy of Janne Lepola. 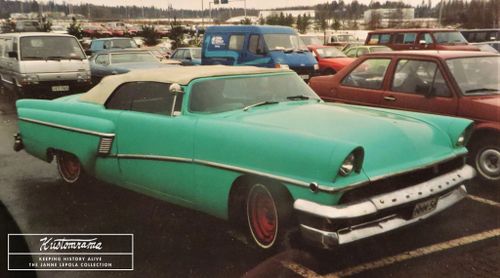 The Crawling Merc! Anssi Purujärvi's 1956 Mercury Monterey was built using parts from a Montclair and Monterey, "both 4 door sedans. Anssi Purujärvi is the builder, and it was done in 1984/1985 in Mikkeli. Anssi moved to Helsinki around 1988, and Markku "Mano" Pahkajärvi has owned the car since 1991!" Photo courtesy of Janne Lepola. 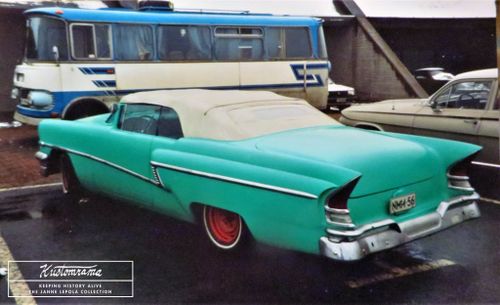 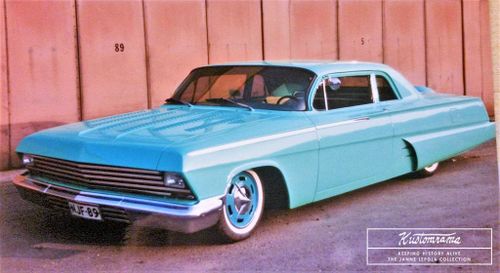 Jari Itäsaari's 1962 Chevrolet custom of Lathi, Finland. This one was built in the late 1980s, and according to Janne, it is one of the most beautiful Suomi Kustom Chevy's of that era. "Sadly it has disappeared. Born four-door. Of course." Photo courtesy of Janne Lepola. 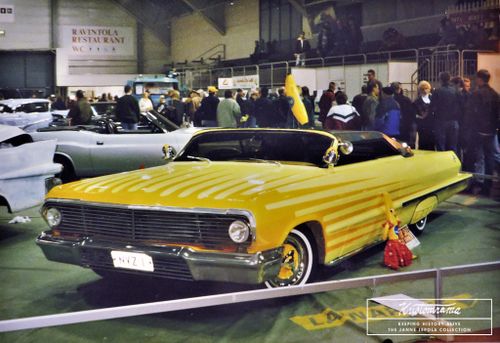 A photo of The Banana Split taken at an indoor car show. Photo courtesy of Janne Lepola. 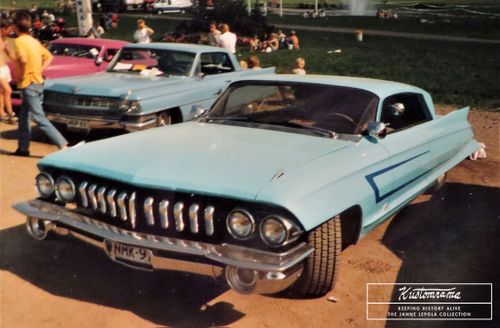 Kalle Uusitalo's 1961 Cadillac custom of Loimaa, a small town with a lot of US cars. Kalle built this Cadillac in the early 1990s. Photo courtesy of Janne Lepola. 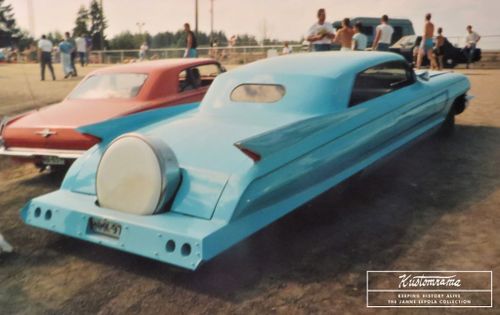 A rear end shot of Kalle Uusitalo's 1961 Cadillac. Continental kits were hot in Finland in the 1990s. Photo courtesy of Janne Lepola. 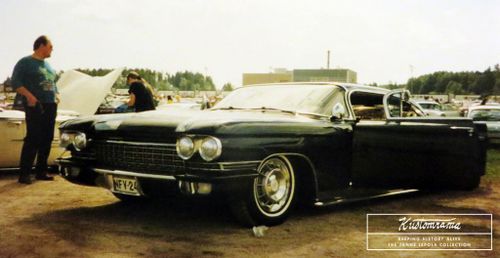 Jari Kilkki's 1960 Cadillac custom from Kotka. This was the first chopped 1960 Cadillac in Finland. It was stock when Jari got it in 1990. He still owned it in 2022. Photo courtesy of Janne Lepola. 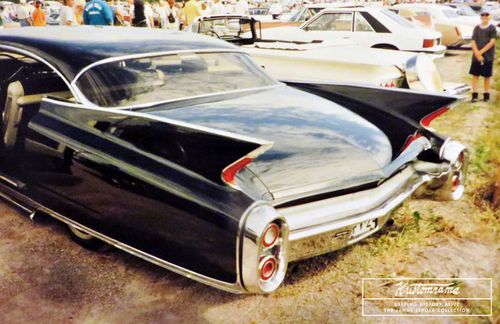 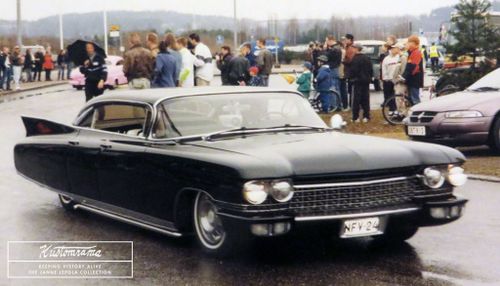 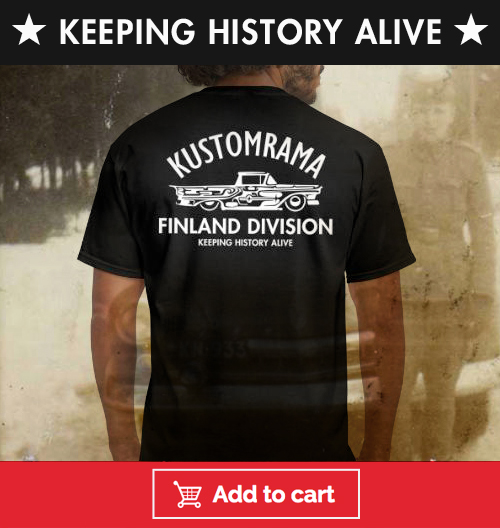 The Kustomrama Finland Division Shirt is now available in the Kustomrama Online Store. Click here to order yours today.

Janne Lepola had to travel around the world to find out how special the Suomi kustom tradition really is! "On my first trip to Los Angeles I showed pictures of Suomi Kustoms to my new friends and even though they said "nice," I could see from their faces that something was wrong! It took a little time for my eyes to grow to the same level and start seeing it the same way. First, it felt bad to see all the childhood hero cars in a new light. And even my own cars started to look very Finnish after a while. But then it hit me like a hammer! Noplace else in the world has this powerful "let's make four-door to a Kustom" scene as we have and the more I was learning about it, the deeper I sank into the game... One good example was when John D'Agostino posted a picture of my friend's chopped convertible Buick. It's a mid-size mid-sixties and of course, made out of rusty four-door. It's shiny pink with flames on and even a working roof! But still, the first comment was "Poor old Buick"... It must be hard to imagine that we use our time on cars like that. Cars they wouldn't even use in a Demolition Derby. And don't get me wrong we have here very quality builds but that's not the point of this story. I was born in 1984, so I'm a young one, but when I was ten years old the Suomi Kustom scene was at its peak! So you can imagine how deep scars those chopped X-Frame Chevys and other oddballs left in my brain... One of those was a 1963 Chevrolet Impala called Banana Split. At the same time, my big brother's friend bought a 1962 Chrysler mild custom four-door of course, and I got to cruise in that one! In the city, we did make new friends with a man who did build the first 1950s Kustom in Tampere. It was a 1951 Chevrolet "Masi Nine" as the plate said... Now you know why this theme is so close to my heart."[1]

Where it all Began

"Even my dad and his friend had a 1951 Mercury in the '60s. I asked him why they didn't kustomize it, and he told me that they didn't even know what that meant at that time... First, I thought that it was just my dad who was more into raggar-cars, than a kustom guy, but then I read a story in the V8 Magazine called "Album Treasures," that there was only one Kustom car in Finland in the '60s, and that was an old Checker taxi cab that was lowered and made into a two-door coupe. That was hard to swallow!?!?!? Only one?!?!? In the US, the biggest wave was gone already at that time, and in Sweden they built tilted headlights everywhere! And we had only one sad old cab... But then in the '70s things started to happen, but the style was more hot rod rake and mudflaps than the traditional style. I asked Kalle Koskivirta what was his motive when he built the first 49-51 Kustom Mercury in Finland. He said there was no big reason to do a Merc, he just wanted an old car to kustomize... "It could have been a Volga as well!" True passion for the game i would say! And that was the '80s already. I have talked with many older Kustom builders, asking them what was their first encounter with a kustom car? I was surprised that it was a movie! Not a magazine... Not a car show... Just a small budget movie that one man wanted to do because he had lived the same lifestyle as the kids in the story... The name of that movie is American Graffiti!!! The year was 1975 when it hit the screens here, and the Pharaos Mercury yelled "Stand by for justice!" and that it did! Justice for kustom cars! In a better way than Lucas would ever imagine. One other well-known builder in Finland, Olavi Rautauoma, who made one of the first '50s style Kustoms in Finland (NEV-Chevy) said that magazines from Sweden, Colorod and Start&Speed made a big impact! "Sweden was our America back then." In 1977 there was a picture of Barris Kustom in a Swedish magazine, and after that, the game was on! He had to have one too..."[1]

"To find the real reason why... I had to go even deeper in the Finnish soul and try to find out what makes a man build a kustom out of a four-door junk that has been dead for years. It must be the so-called Finnish SISU! That means a strong spirit and kind of stubbornness that if you want something you do it even who says what! And I have to say from myself that the biggest power I get is when someone says "You can't make a kustom out of that!" After that, I'm like f*ck let see about that! One thing that I have heard a lot is "There will not be another one like this!" That's not the best motive to do a Kustom, but if that gives you strength then, ok. Kustoms should be a mirror of the owner's soul. We are all different, so let the Kustoms be different as well."[1]

"In the '90s we saw a big boom of chopped X-Frame Chevies and other '60s era cars... The evolution goes several rounds, from a four-door to a chopped two-door until it ends up as a convertible. But then in 1999 came the Häjyt movie, which tells a fictive story about two Finnish criminals that sell illegal booze and fight a lot... Good movie but they drive a flat black 1964 Chevy that has been made into a convertible. After that, most of the Finnish Kustoms got the same color. And hey, don't get me wrong!!! Flat black is great when it's done right and looks cool but in this case, it was most of the times the last color it got before ending up as a pilsnerbil. Now after 20 years we are getting over it little by little. A new generation of builders has come. It is not big as the '90s group, but times have changed a lot from those days, and now every iron bumper US-car is worth money, and the older they are, the higher the price goes."[1]

Where are We Now?

"The quality of Suomi Kustoms is very high these days. A lot of the recent builds have been sold out of Finland. At the same time, the game has become more serious, and that is not always a good thing when you do something creative yourself. It has pushed the first cut to be even harder. I like that, but now you see people try to personalize cars by adding stuff, and that's not the right way to do a Kustom at all... Many times less is more, not the opposite. When I have talked to people that do it, they have in their mind what is wrong in the car design or what do they like to do but "it's too good to do a Kustom..." I hate that phrase!!! If you do it right the car is worth even more than stock, and when you look at world history backward, cars are a new thing and they may not be here for long anyway, so "F*ck It just Cut it!" This should be fun!"

"We have always had very hard inspections in Finland, and that is a win some, lose some situation. Some people do everything by the rule book, while other, like me don't give a f*ck and do what ever they like because it's already illegal anyway. And still, most of the time when the job is done right, it goes through the inspection like nothing! That thing is getting looser every day because new cars are so so far away from these steam machines... And most of the time the inspector is just happy to see an old car come in. One thing I have to say about the Finnish people is that most of us are very "me, myself and I" and when it comes to building a car you have to do everything by yourself. That is not a bad thing, but think about how much faster and easier it would be to hand the hard parts of a project to someone else, no matter what that part would be. We all have weak and strong parts of our talents. The time we have been given is limited, and what sucks is that we don't even know when it's gonna run out so do as much Kustoms as you can!"

Please get in touch with us at mail@kustomrama.com if you have additional information or photos to share about The Janne Lepola Photo Collection.