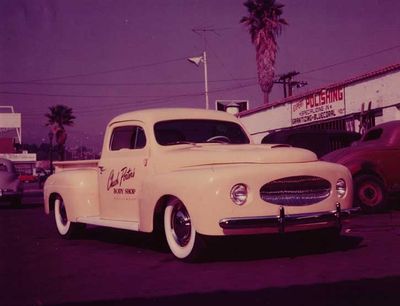 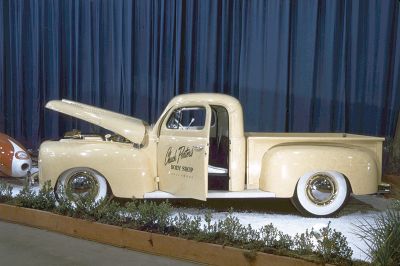 Chuck Porter's truck at the 1955 Los Angeles Motorama. Photo from the GT350LADY Collection[1] 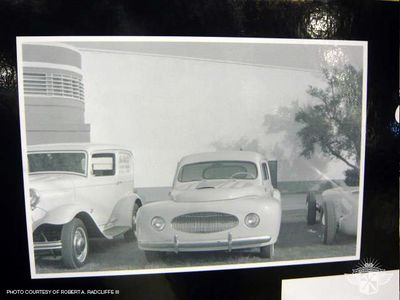 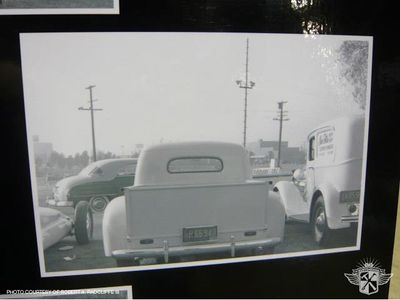 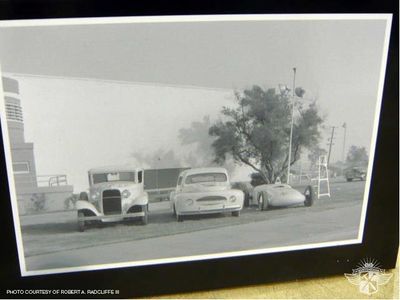 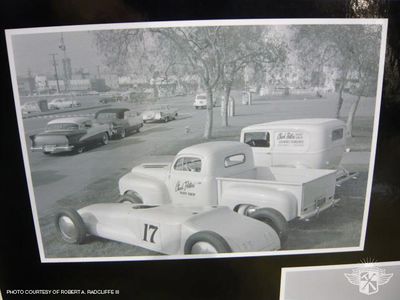 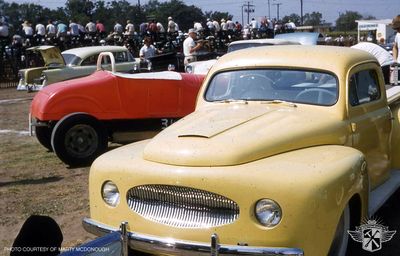 Chuck's Pickup at the 1957 NHRA Nats in Oklahoma City, Oklahoma, after he had sold it. Photo by Marty McDonough. 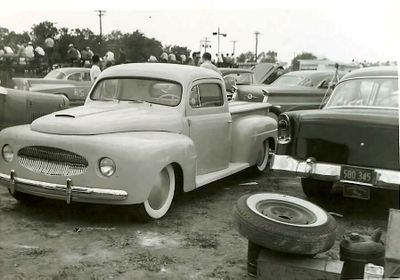 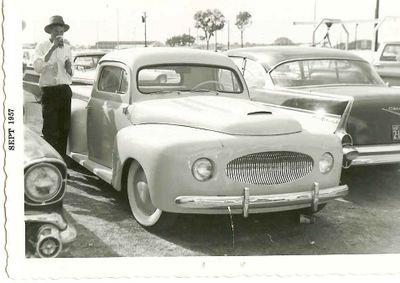 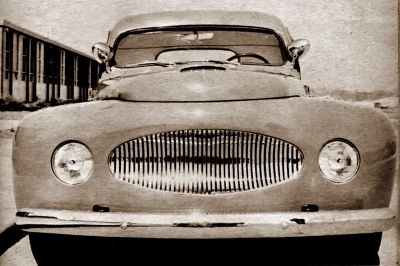 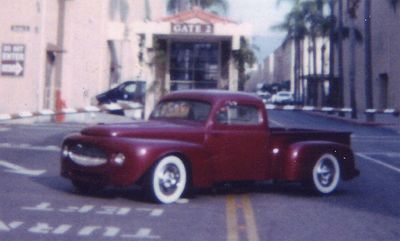 The truck as it looked afterRay Farhner of Farhner Custom Shop had painted it Buick Seminole red for Herb Glock. 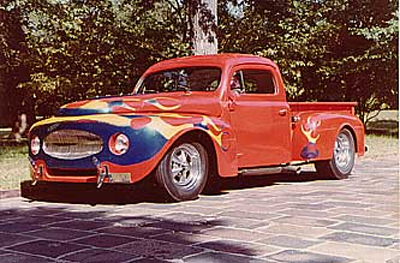 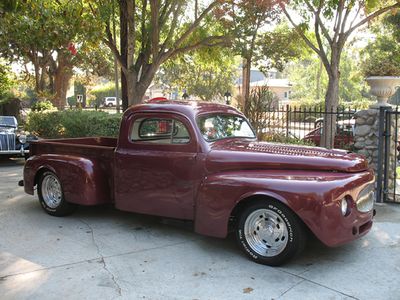 The truck as it appeared in 2006 when Debby Porter bought it back. 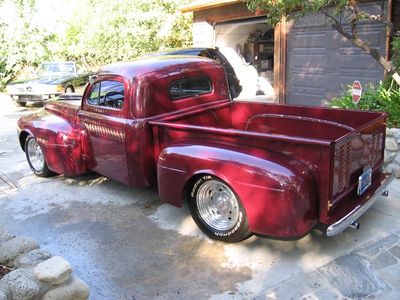 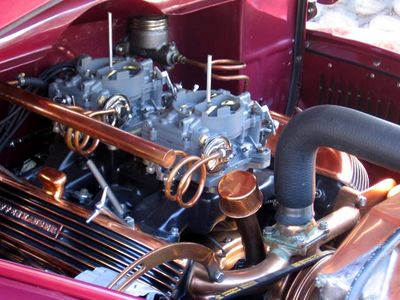 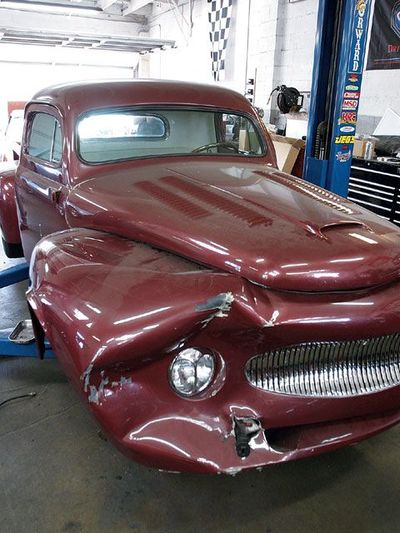 The truck as it looked after Debby stuffed her father's old custom halfway into an Audi trunk. 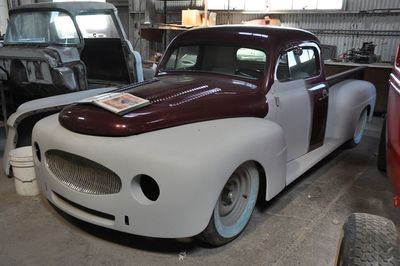 The truck as it sat after the damaged fender has been repaired, and the wheel wells had been reshaped back to how they were in 1955. 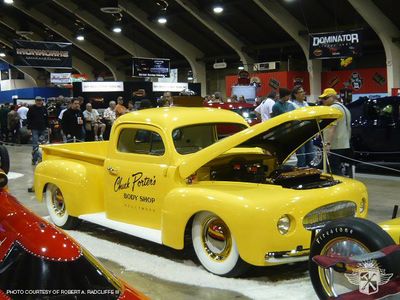 The restored version of Chuck's old truck at the 2012 Grand National Roadster Show. Photo by Robert A. Radcliffe III. 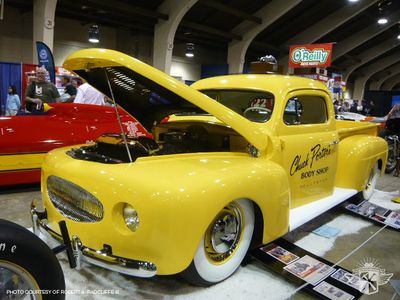 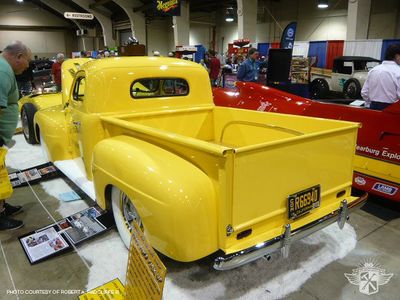 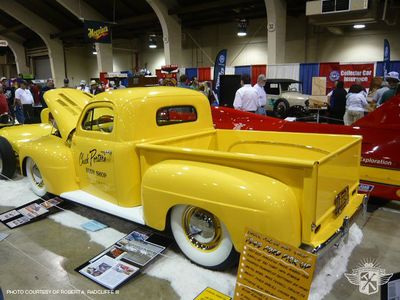 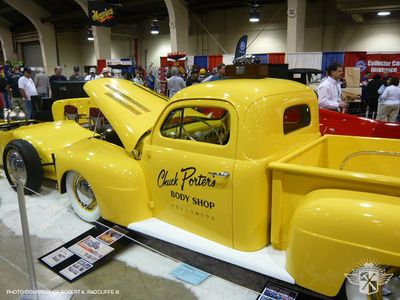 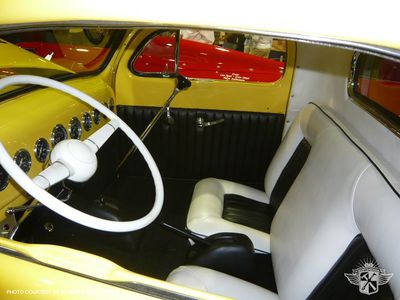 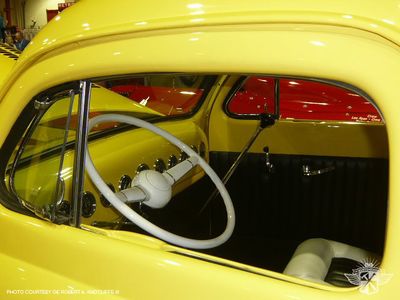 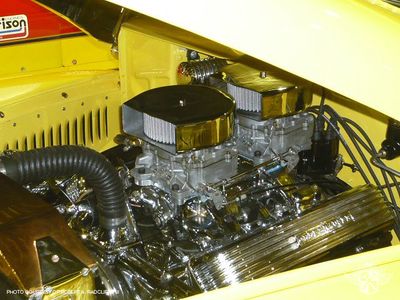 1949 Ford F-1 Pickup Truck owned and restyled by body man Chuck Porter of Chuck Porter's Body Shop in Hollywood, California. Chuck chopped the truck 5 inches, sectioned it another 5 inches, before he channeled it down over the frame. In addition to this, the frame was also C'd and the rear springs relocated on the side rails to account for another 7 inches. After Chuck had worked his magic, the total height of the truck had decreased by a total of 22 inches. It was decided to be easier to make both the section and channel cuts at the same time, so the full ten inches were taken out of the firewall, and the same amount off the rear of the cab. As a result of this, only five inches had to be sectioned out of the door, since the other five inch difference extends down over the frame. In order to compensate for the alterations in the cab, Chuck also had to section the hood 5 inches. On top of the hood Chuck placed a nine-inch wide hood scoop before a total of 90 louvers were also stamped into the hood.

To maintain rear vision, only three inches of the five were taken out of the rear window. Due to the extreme overhang on the truck body, Chuck decided to shift the cab and fenders back six inches on the frame, changing all of the body mounts. New fender wheel openings were in order and the bottoms of the fenders were trimmed at this time to compensate for the previous five-inch drop. After moving the entire cab backward, the stock bed was out of the question. A new bed was made out of aluminum by Koch and Dunbar's Hollywood sheet metal shop. The new bed was five inches shallower and ten inches shorter than the original one. On the new bed, taillights from a 1940 Chevrolet were used. Behind the bed, Chuck mounted a bumper from a 1940 Ford. Because of the shortened bed, the rear fenders also had to be repositioned. The wheelwell cutouts were moved back 5 1/2 inches, and 3 inches trimmed of the bottoms. The custom grille was made from flat aluminum that was welded to a frame.

A lot of modifications were done to the body, the driveline was shortened 24 inches, and Chuck replaced the front axle with a standard single spring 1939 Ford tubular member. The new axle reduced the weight and gained a five inch drop in the front. A 1953 Cadillac V8 motor was used as powerplant in the truck. A 1937 LaSalle gearbox was then hooked to the motor.

Chuck later sold his car to John Robinson of Tulsa, Oklahoma. The car was then sold to Herb Glock of Liberty, Missouri, and the car appeared in the small magazines while Herb owned it. According to the magazines, Herb had built the car himself. This is not quite accurate. By then the car had been repainted with 16 hand-rubbed coats of Buick Seminole red lacquer. The paint job was done by Ray Farhner of Farhner Custom Shop in Kansas City, Missouri.

When Herb owned the truck it was powered by completely reworked 365 cubic inch 1956 Cadillac Eldorado engine. The bottom end was balanced and the heads ported. The car also ran on 640 x 15 tires up front, and 800 x 20 eight-inch Englewood slicks on the back. Inside, the car featured a black and white rolled and pleated Naugahyde upholstery, swinging pedals, and 10 Stewart-Warner gauges. The dash was filled and finished in Pearlescent White. The car also featured a Cragar steering wheel and a column from a 1958 Ford.

Herb later sold the truck to Jim Mickle of Tulsa, Oklahoma. In August of 2021 Rick Molloy told Sondre Kvipt of Kustomrama that he recalled Jim owning it in 1975. "The truck was red with flames on the front end at the time when Jimmy owned it," he told Sondre, adding that he and Jim would Cruise Peoria in Tulsa.[2] Jim owned the car for a while before he sold it to Larry Stansbury of Tulsa, Oklahoma.

After Chuck passed away, his daughter Debby Porter began searching for her father's old shop truck. She advertised for it on multiple car sites and everywhere else she could think of. One friday night in 2006, while attending a "car night" at Bob's Big Boy, in Toluca Lake, California she placed a poster in the window of her El Camino with pictures asking "Has Anybody Seen This Truck?" A guy walked up and said "I know that truck", and took her phone number. He left Bob's. 15 minutes later, Debby was talking to the owner of her dad's pickup. She went to see the truck, and burst into tears immediately when she saw it. The owner said he would sell it, but he wanted a lot of money for it. Debby did not have the funds by the time and asked him to give her the first right of refusal when he went to sell it. Meanwhile, she got engaged to another autophile, and sold her house.[3]

October 1, 2006 Debby Porter was able to buy back her dad's old truck. The car had gone through many alterations during the years, but it was still driveable featuring a reworked 1956 Cadillac Eldorado engine. The tailgate was filled with louvers, the 1940 Ford bumpers were missing, so were the running boards. Debby's plan was to restore the car back to its first Goldenrod Yellow version. Number one the list was to repair the brakes. Debby found a repair shop which was familiar with the mechanical workings of the 1950s and brought the car to the shop. Not long after Debby picked up the truck with brand new brakes, she fired up the dual-quad Cadillac engine and headed towards Friday night cruise at Bob's Big Boy. Smack-dab in the middle of rush-hour traffic behind a swarm of trendy Volvos and Lexuses screeching up to a red light, the old truck came to a stop stuffed halfway into an Audi trunk. Luckily the Ford made it pretty well, the grille was intact, but the right front fender suffered a lot of damage. After the accident, Debby had the brakes upgraded to todays standard with a full set of disc-brakes.[4] Next, Mike Fennel Restorations in Saugus, California was chosen to transform the car back to its former glory. All the modifications made by the other owners were redone by Mike like the way Chuck built the truck. By August 2010, all the modifications were done and it only needs a paint job the get finished.[5]

Before the restoration was completed, Debby sold the truck to Richard Munz. One of her stipulations of the sale was that the truck should be consistently shown, and not just parked where the public couldn't see it. I January 2012, the newly restored version of the truck made its debut at the Grand National Roadster Show in Pomona, California. In 2015 Debby told Kustomrama that Richard did a spot-on completion of the restoration; "He also kept his word by donating the truck and my dad's Bonneville car to the NHRA Museum where it is today."[5]

Please get in touch with us at mail@kustomrama.com if you have additional information or photos to share about Chuck Porter's 1949 Ford.