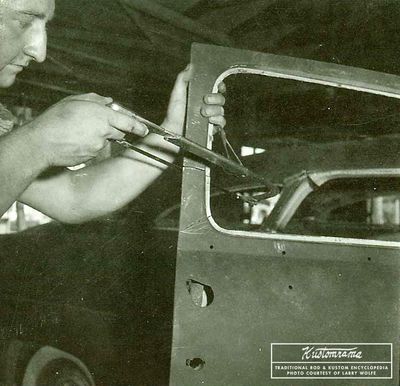 A young Dave chopping the top on a Mercury. Photo courtesy of Larry Wolfe. 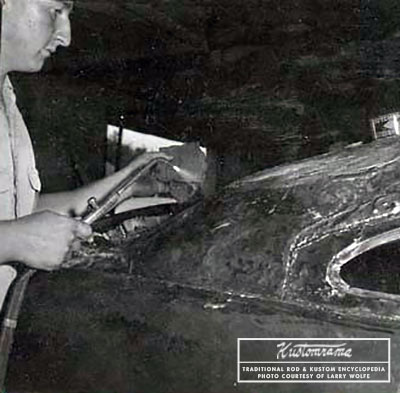 Dave leading a Mercury roof after chopping it. Photo courtesy of Larry Wolfe. 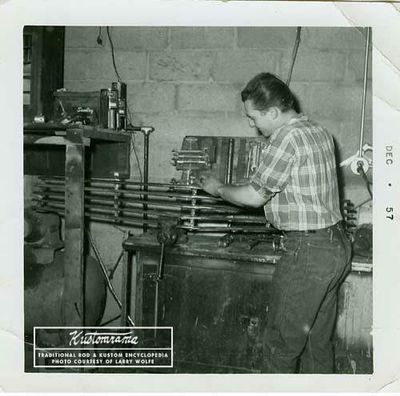 Dave working on a tube-grille. The photo was developed in December of 1957. Photo courtesy of Larry Wolfe. 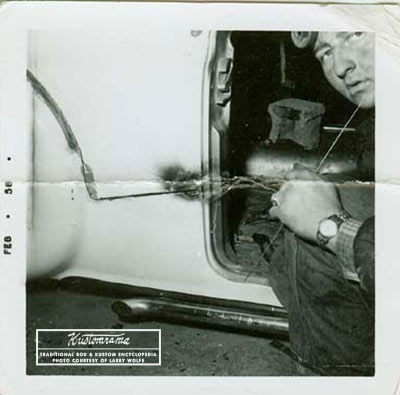 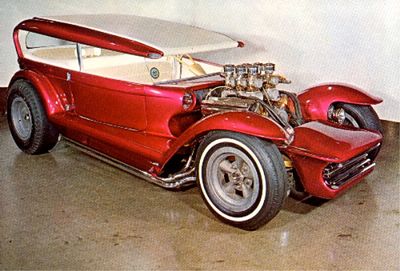 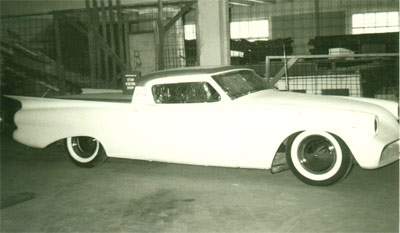 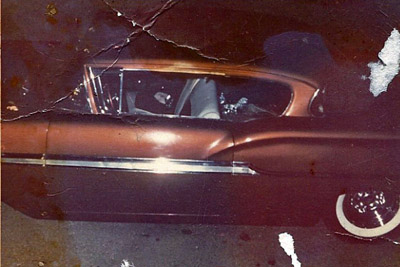 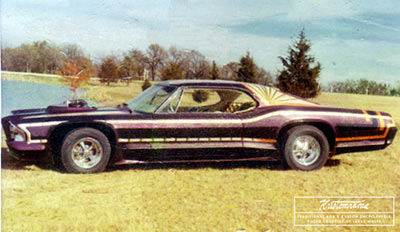 Dave Stuckey's 1965 Pontiac Catalina. The build was started in 1967 and completed in 1969. The car was Dave's personal driver, and the overall height of it was drastically reduced by chopping the top 3 inches, sectioning the body 3 inches, channeling it 2 inches and lowering it 6 inches. 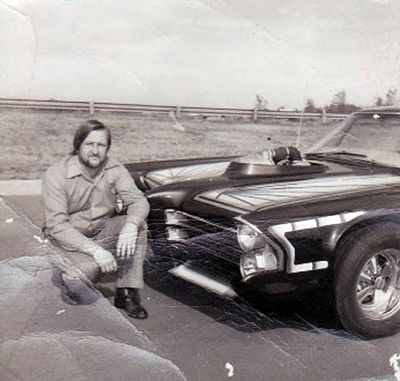 A photo of Dave with the 1965 Pontiac. Photo courtesy of The Wichita Eagle. 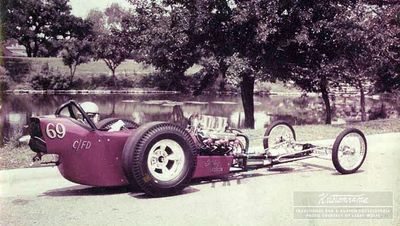 The Wichita Warrior was an exhibition wheel stander that Dave built for Clayton Willard. Photo courtesy of Larry Wolfe. 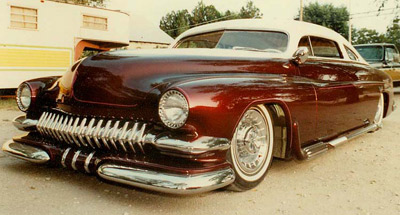 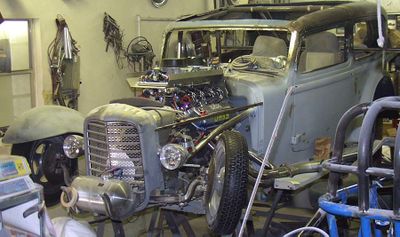 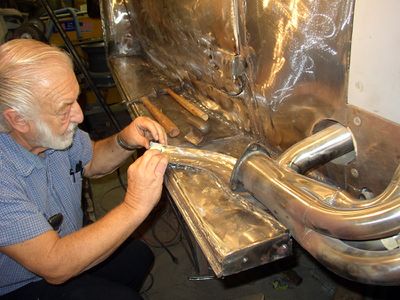 Dave working on the right exhaust on the Next Generation Lil' Coffin in September 2010. Photo by Larry Sunner. 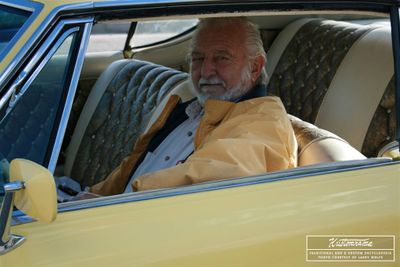 A photo of Dave in the driver's seat of his old 1965 Pontiac Catalina custom. Taken around 2013, Dave and current owner Larry Wolfe had been friends for many years when Larry bought the car from David Schluck. Photo courtesy of Larry Wolfe.

Dave was born December 6th, 1937, and he got his first car, a 1934 Ford, at age 13. The car was hopped up featuring a 1948 Mercury mill. After getting a lot of complaints about loud pipes, or lawns that had been accidentally driven across, Dave's dad forced him to sell the 1934 Ford. After the Ford was sold, it didn't take long time before Dave got a new set of wheels. There were always plenty of cars around the Stuckey's house in one state of disassembly or other. This bugged the neighbors so much that each time a new car would hit the street, they called the police and complained.[1]

In 1954 Dave bought a 1932 Ford tudor sedan from a lot on South Broadway in Wichita. The car had perfect body and fenders. The first night Dave owned the car he removed the motor, transmission, fenders, hood and grille so that he could channel it. He then took it to General Welding, the company where he worked after school, and channeled it 9 inches.[2]

At age 16 Dave began to work part time at Darryl Starbird's Star Kustom Shop after school. Dave worked for free in the beginning, the only pay he wanted was to be taught the trade while Darryl helped him work on his 1932 Ford Sedan.[3] After a while Dave began to work full time for Darryl, and luckily for his neighbors he moved most of his automotive activity to Star Kustom Shop. Being tutored by Darryl Starbird Dave developed his metalworking skills and his eye for "what looks good".[1] The first version of Dave's 32 Ford Tudor Sedan, featuring a sectioned 1932 Ford grille, was completed in 1956.[2]

In 1959 Dave opened his own shop Stuckey Kustom. Bill Johnson, Bill Tumbleston, Roger Hatchett, and George Huengardt that had worked for Darryl Starbird went on to work at Dave's shop.[2] Not lacking for customers, Dave was soon commissioned to restyle Pat Mulligan's 1958 Chevrolet.[1]

By 1959, Dave's 1932 Ford tudor sedan had received a grille similar to the Barris Kustoms restyled Ala Kart. In 1960, after Dave opened up his own shop, he began to rework the car again. This time it was sectioned 4 inches, and the top was made cantilevered, amongst other modifications. Dave was running out of money at the time, and decided to sell the car to his good friend Larry Farber. They agreed that Dave would finish the car so Larry could show it. Larry was going to take it to California where George Barris had lined up shows for him. Dave changed the front seat to a bench seat, put a tonneau cover over the rear seat, and had Frank Turner re-do the upholstery. White Naugahyde covered the seats, while the carpeting was gold. Dave painted the car candy wild cherry. Larry took the car to California and showed it there as the Lil' Coffin at various shows. American Motors Company saw the Lil' Coffin at the Worlds Fair. They liked what they saw, and decided to hire the man behind the car. A deal was made, and Dave went to Detroit in 1965 to work as a clay modeler.[2]

After working several years for American Motors Company, Dave went on to work for the Alexander Brothers. While working there he was involved in cars such as the Dodge Deora and Harry Bradley's El Camino. While Dave was working for the Alexander Brothers Pete Seaton came to him with a job offer that he accepted. They had just wrecked the "Seaton Shaker" Chevrolet funny car. Dave put a new body on it, did the aluminum work, and modified the wheel wells. Dave did mostly aluminum work and roll bars while working for Seaton. After a while, Dave went to New Orleans to do some work for Tom Reagon who owned Car Shop Inc. He worked for Tom for one year, before he decided to move back to Kansas.[2]

All He's Ever Done Was Build Cars

Larry Wolfe has known Dave since the 1970s, and in 2018 he told Sondre Kvipt of Kustomrama that as long as he has known Dave, "all he's ever done was build cars. He's built a lot of his own cars and done a lot of customer cars. Even up to the end he had several of his own projects going on in the shop. The project he’s worked on for years was the 32 Sedan that in the beginning, he called the Lil Coffin II. Working on the 32 is what kept him going and kept his mind off his health issues."[4] Monday, July 24, 2017 Stuckey passed away, 79 years old.[5]

Please get in touch with us at mail@kustomrama.com if you have additional information or photos to share about Dave Stuckey.