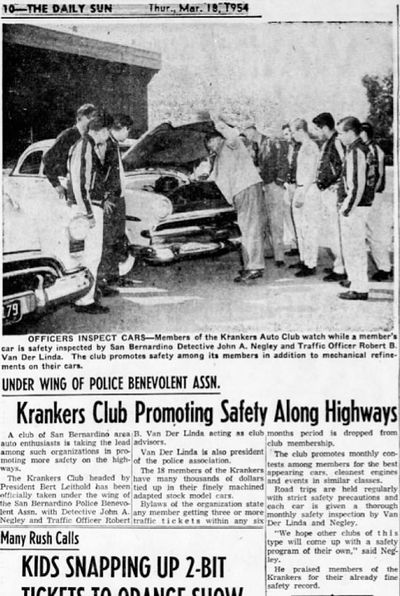 The Krankers were good to promote safety among the kids of San Bernardino. This is a newspaper clipping from The Daily Sun, March 18th 1954. 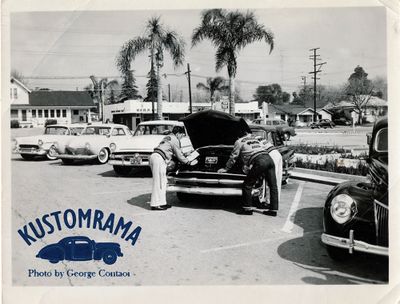 The Krankers, 1955. Photo by George Contaoi. 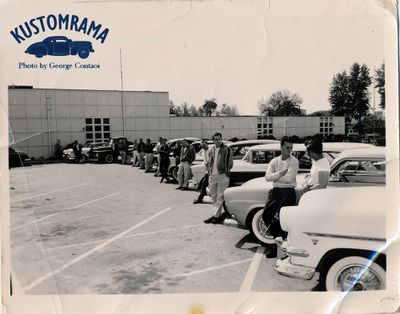 A lineup with the San Bernardino Krankers from 1955. George Contaoi's 1955 Ford F-100 is the second car from the back. 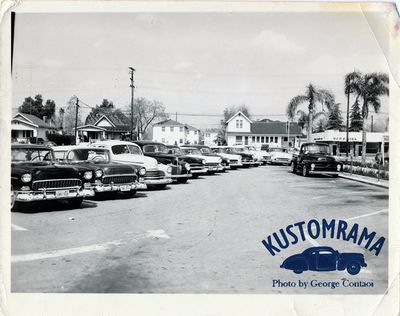 A photo from the same session as above. 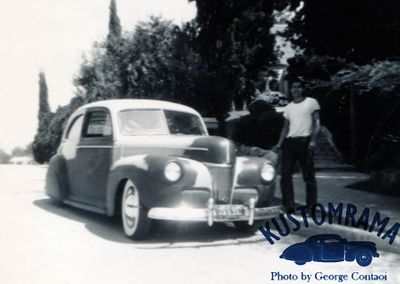 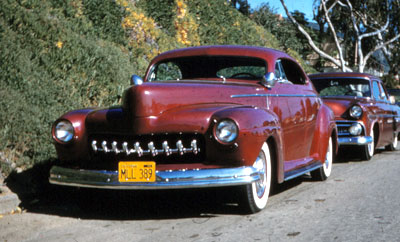 George Contaoi's 1941 Mercury Coupe of San Bernardino, California. George was a member of the San Bernardino Krankers car club. He bought the Merc in 1952, began restyling it in 1953, and completed the build in 1956. The work was performed by George, Al Andrade, and Dick Richardson at Dick Richardson's Custom Shop. The car survived, and was still around in 2020. At the time it was located in Barstow, California. 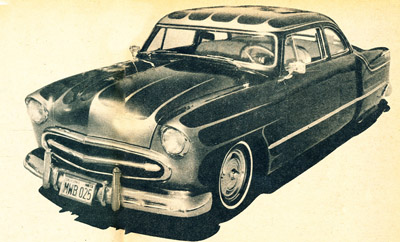 Lloyd C. Hammond's 1949 Ford of San Bernardino, California. Lloyd was a member of the San Bernardino Krankers and his car was known as "The Majestic Lady." The first iteration of his Ford was completed circa 1958. 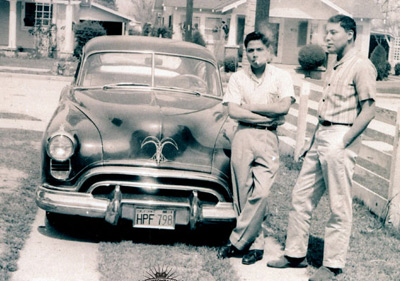 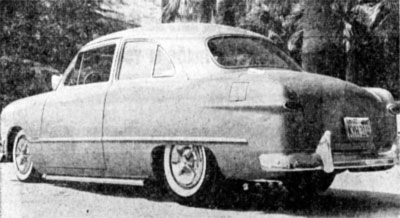 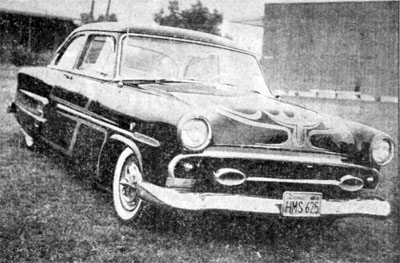 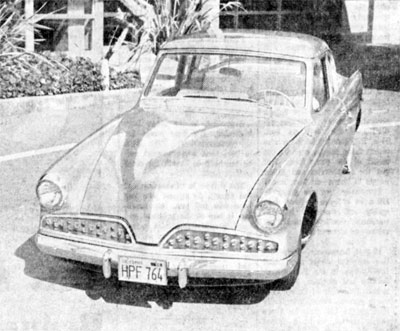 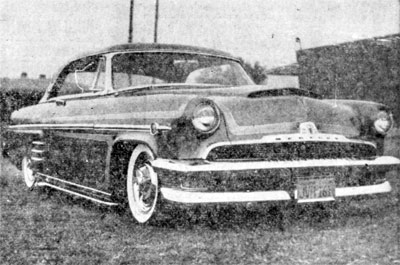 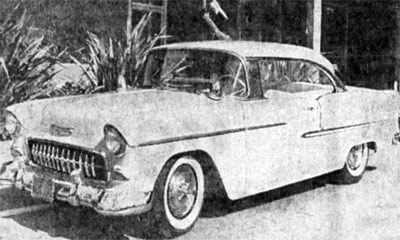 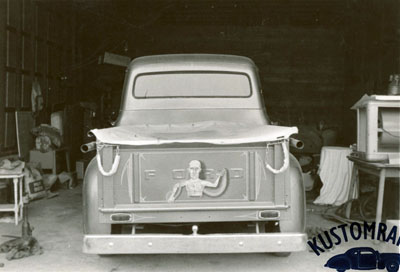 George Contaoi's 1955 Ford F-100 of San Bernardino, California, was restyled by Dick Richardson's Custom Shop and Barris Kustoms in 1956. Von Dutch striped it and made a mural on the tailgate along with Dean Jeffries. 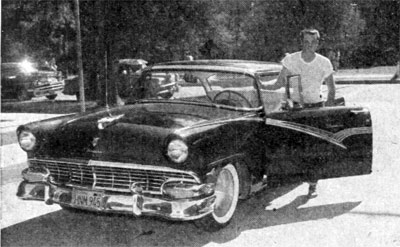 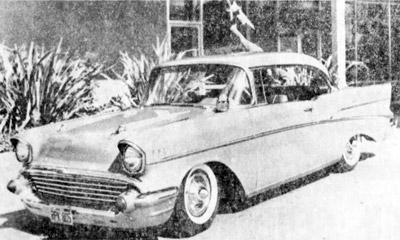 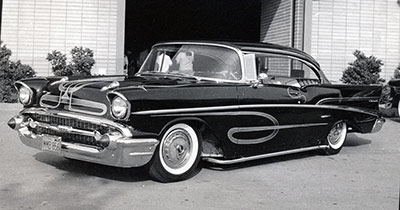 Bob Webster's 1957 Chevrolet of San Bernardino, California. Bob was a member of the San Bernardino Krankers car club, and his car was known as "El Tigere". It was restyled circa 1957-1958. 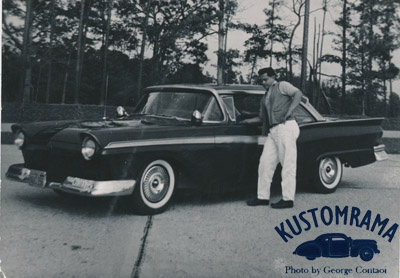 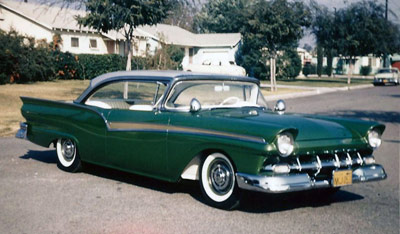 Hilton Vail's 1957 Ford Fairlane 500 of San Bernardino, California. Hilton was an active member of the Krankers from 1958 to 1961. He bought the Ford brand new, and completed the build circa 1958. 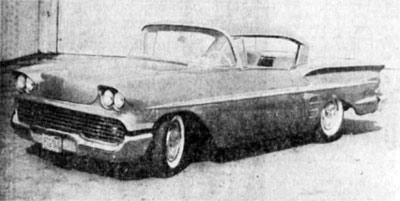 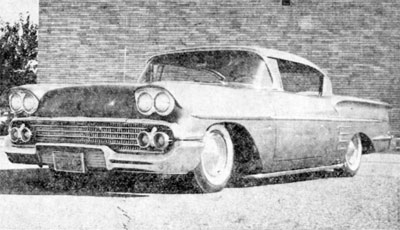 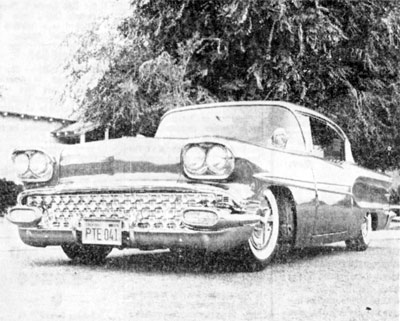 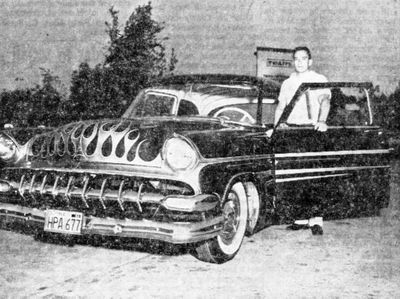 A photo of Krankers President Richard V. Guzman with his 1954 Ford custom. Taken in 1958, this photo appeared in The San Bernardino County Sun Sunday, May 25, 1958. 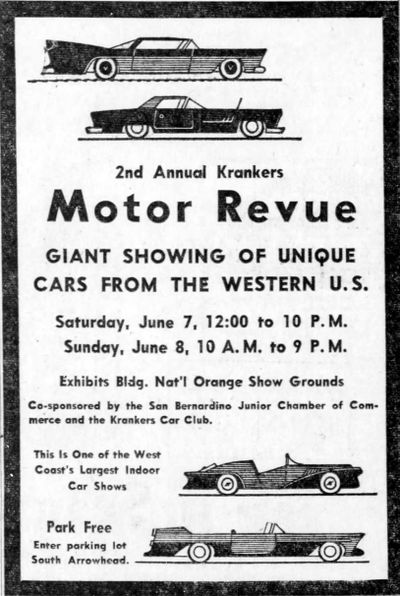 The 2nd annual Krankers Motor Revue 1958 was held on June 7 and 8 1958 at the National Orange Show Grounds, San Bernardino, California. 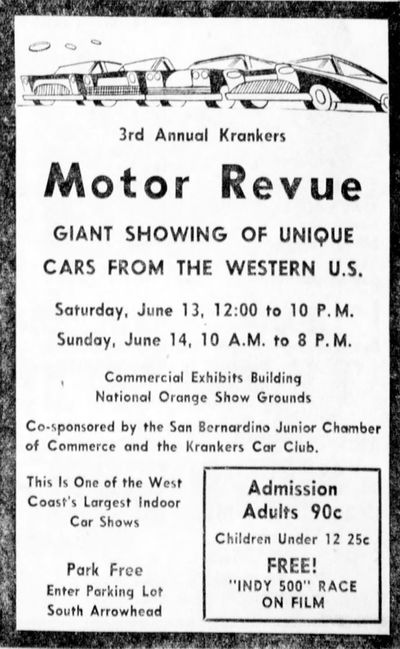 Poster from the Krankers Motor Revue 1959. 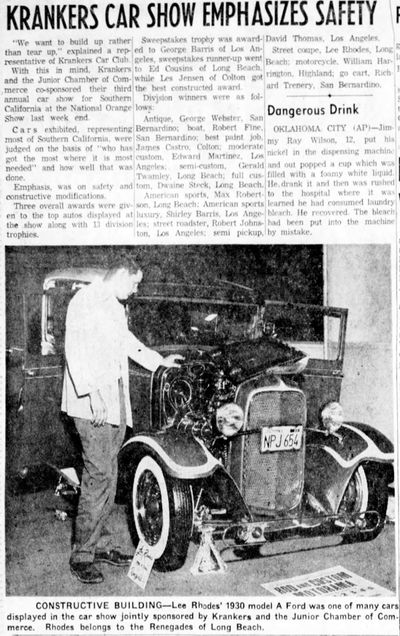 In 2014 George Contaoi told Olav Kvipt of Kustomrama that when the Krankers would embrace new members, each of the members were given a set of marbles, one black and one white. Next they secretly put the marbles in a box, if all the marbles where white, then the new candidate member could join the club as a worthy member. If one or more marbles in the box turned out to be black, then the candidate member would be rejected.[2]

Car Shows Hosted by The Krankers

Please get in touch with us at mail@kustomrama.com if you have additional information or photos to share about San Bernardino Krankers.