From Kustomrama
(Redirected from The Clean Gene Sadoian Collection)
Jump to: navigation, search 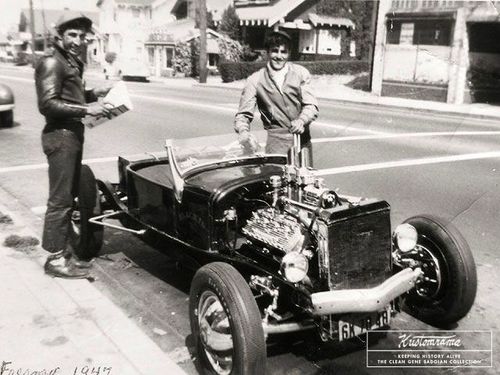 A photo of Blackie and Amos Torosian with Blackie's roadster taken in Fresno, California in 1947. Clean Gene Sadoian was 14 years old the first time he saw Blackie in his cut down black hot rod in 1948. " The driver was a scary looking guy with cut off t-shirt sleeves. He looked at me and smiled. I saw gold leaf letters on the side of car—"Blackie". He did a burn out for me, I was forever hooked." Photo courtesy of Clean Gene Sadoian. 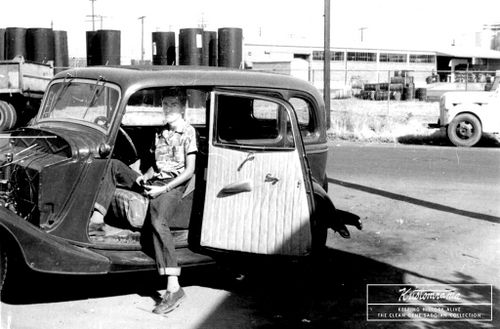 Gene was brought home from the hospital in this 1934 Ford Four-Door Sedan that his father had just purchased. "He purchased it in Fowler, California, just 10 miles from our home in Fresno, California. The car cost $640, a lot of money at the time. It was our family car until 1949 when he purchased a Lincoln Cosmopolitan, giving me the 34 to fix up." Gene was 15 years old when his good friend Richard Peters took this photo outside United Automotive. "My mother had just sewed up the quilted door panels in Naugahyde chartreuse." Photo by Richard Peters, courtesy of Clean Gene Sadoian. 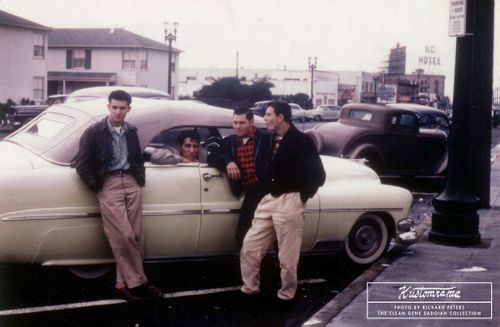 Most of the kids in Gene's gang were Armenians, and they all followed a charismatic WWII veteran widely known around town as Blackie. Gene met Richard Peters at Roosevelt High School in 1950. "He was full of energy and worked very hard at his father Ed's packing house." Taken circa 1951, this photo from Richard's Collection shows a group of Blackie Hosses in front of Richard's yellow Mercury Convertible. According to Gene, Richard was the only one in the gang with a camera back then. Photo by Richard Peters, courtesy of Clean Gene Sadoian. 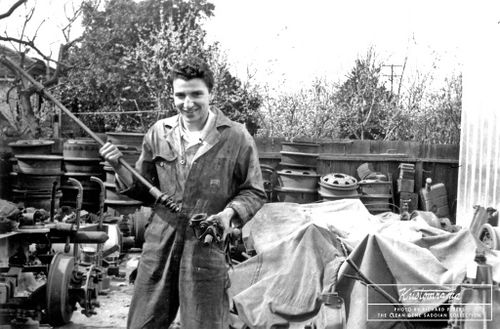 Clean Gene at age 15 holding up the steering gear for Shirinian's roadster at United Automotive. Shirinian's dad owned United Automotive Works, which was a truck repair shop at 304 N Street in Fresno. "It was across the street from Tidewater Oil's main gas and oil delivery plant. His dad had a contract with them to keep their trucks running and maintenance services. That became my part-time job, wearing Richards coveralls, working from age 15-21 while attending school. Richard was in the Army, Motor Pool in 53-54, so I felt I obligated to cover for him." Photo by Richard Peters, courtesy of Clean Gene Sadoian. 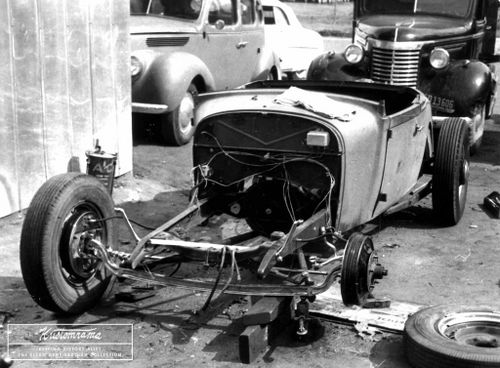 According to Gene, his buddy Richard Shirinian was their leader throughout the 7th grade thru high school graduation in 1952. "He was Blackie's cousin, handsome, with long thick hair like Blackie. He was the first one in junior high school with a car, a 38 Ford 4 dr sedan. I nicknamed it "Dirty Eight" since we did not look at the 38's as hot rod material." In 1950 Shirinian bought a 1929 Ford Model A Roadster from his cousin Paul Soligian. Shirinian’s dad helped him with the build, as well as his best friend, Richard Peters. Taken circa 1951-52, this is the earliest photo Gene has been able to locate of Shirinian’s roadster. Notice the dropped axles and juice brakes. Shirinian’s 1938 Ford can be seen in the back of the photo along with Peters Mercury. Photo by Richard Peters, courtesy of Clean Gene Sadoian. 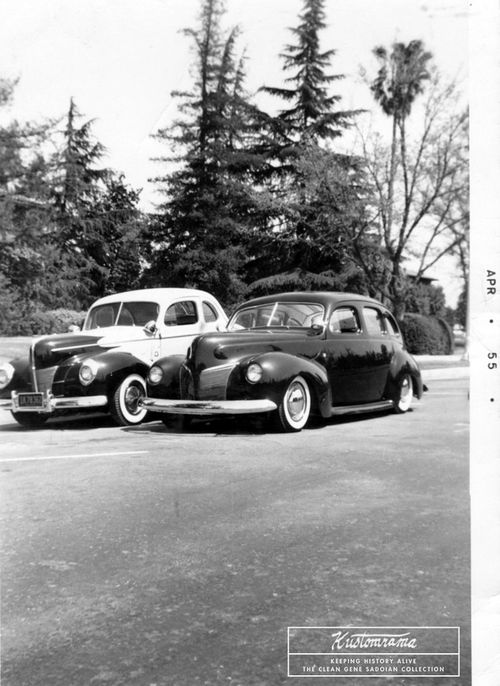 A photo of Mel Lehman's 1940 Mercury and 1940 Ford Coupe taken around April of 1955. Mel was a friend of Gene and a fellow Blckie Hosses. Photo courtesy of Mel Lehman, provided by Clean Gene Sadoian. 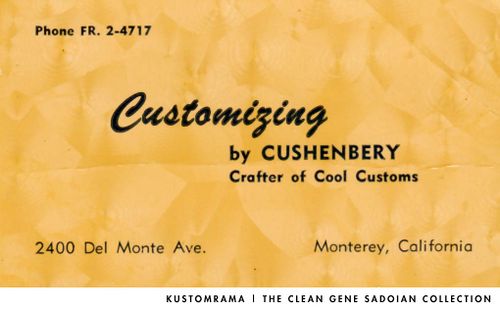 Customizing by Cushenbery. Bill Cushenbery gave this business card to Gene "Clean Gene" Sadoian at the 1962 Winternationals. "He showed his El Matador, wild custom. Blackie also featured his car, that's how I met him." Photo courtesy of Clean Gene Sadoian. 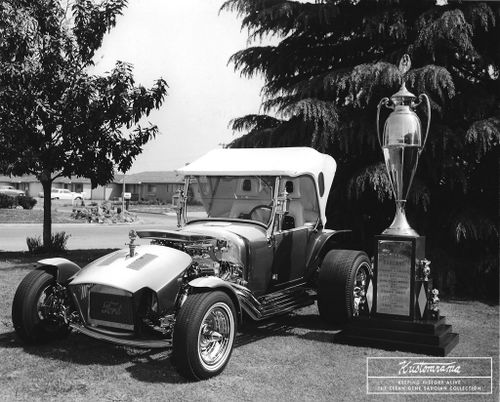 T Plus II. Four of Clean Gene's Fresno buddies had won the prestigious America's Most Beautiful Roadster award when Don Lokey decided to go for the big one with his 1927 Ford Model T Roadster Pick Up. The car was already a show car, so he decided to hand it over to George Barris and let Barris Kustoms take over the final restyling. A wise investment as Don took home the AMBR with the car in 1966. Photo courtesy of Clean Gene Sadoian.

This is a story about a group of Armenian friends from Fresno that helped form the history of hot rodding as we know it today.

Eugene “Clean Gene” Sadoian grew up in Fresno, a city in Central Valley California crowded by Armenians. In fact, the first Armenians that arrived in California in 1874 settled down in Fresno. Most of the kids in Gene’s gang were Armenians, and they all followed a loudmouth kid widely known around town as Blackie. "All of our car guys are known as Blackie's friends," Gene told Sondre Kvipt of Kustomrama when he ask him about how he first got into hot rodding. Blackie was eight years older than Gene. "He was our leader. Most kids in the gang were Armenian, even though they didn't have Armenian names. We were known as villains in the early days of hot rodding," Gene explained before jokingly telling Sondre that Blackie was the constant evil in his life that tried to keep getting him into trouble. "My law enforcement background was the good guy, the Clean Gene, that kept trying to get Blackie out of trouble, so it balanced out."[1]

Please get in touch with us at mail@kustomrama.com if you have additional information or photos to share about The Clean Gene Sadoian Photo Collection.