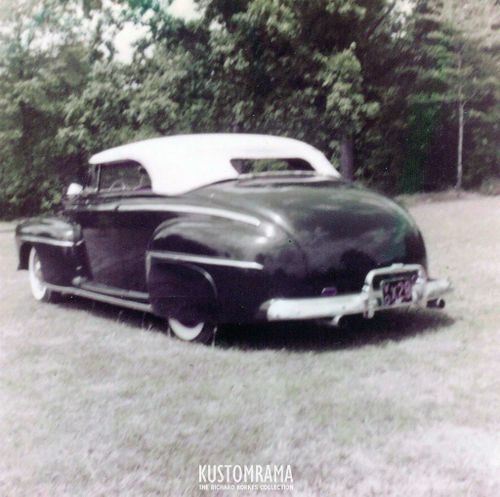 A photo of Nick Maneri's 1947 Ford convertible. It ran a genuine Carson Top, and it was rumored to be an old Barris Kustom. Bob Laurie and Clyde Bangiola owned the car prior to Nick. Does anyone have any more info to share on this old custom? We would love to know more about when and where it was built, and where it is today? Photo courtesy of Richard Korkes. 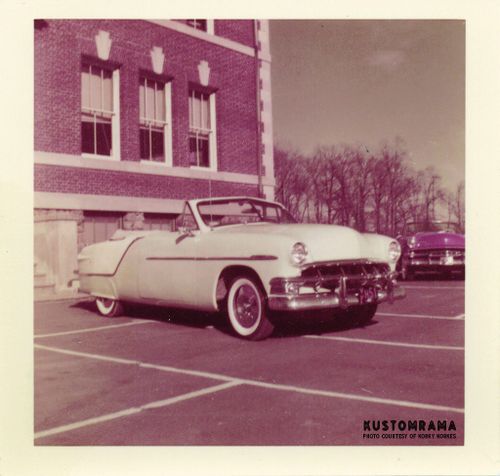 A 1950 Ford that Korky restyled for an unknown owner in the 1950s. Modifications included a shaved hood, removed door handles, frenched headlights, 1954 Oldsmobile side trim and a 1954 Chevrolet grille bar. Photo courtesy of Richard Korkes. 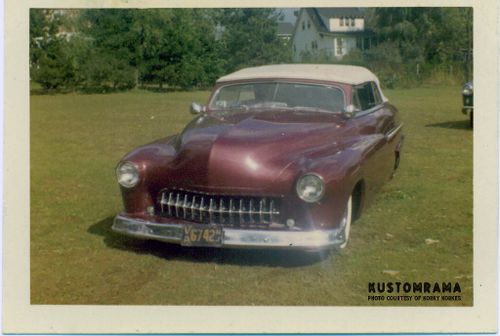 Billy Smith's 1949 Mercury convertible. According to the text on the back of the photo this was Korky's first chop. He was about 21 when it was completed, making it 1956. Photo courtesy of Richard Korkes. 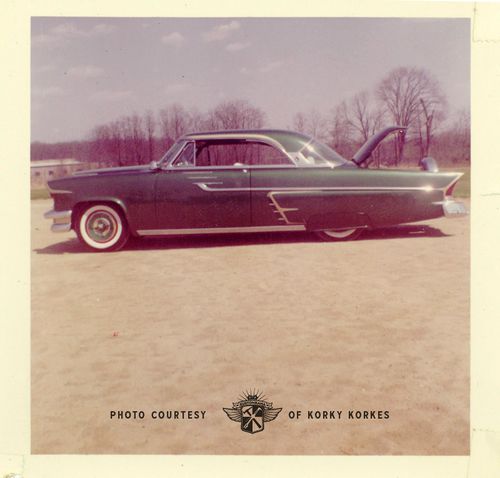 A profile shot of an early version of John Nadzon's 1954 Mercury. John's Mercury, named The Mysterian, was restyled by Korky. The rear fenders on John's Merc were extended 2 feet and fit with 1956 Packard taillights. As this photo shows, it was painted green with gold scallops. By 1960 John's Mercury had been fit with a 1959 Mercury grille and Lincoln quad headlights. This version made it's debut at the 1960 Hartford Autorama, where it was displayed along with three other Korky custom creations. Photo courtesy of Richard Korkes. 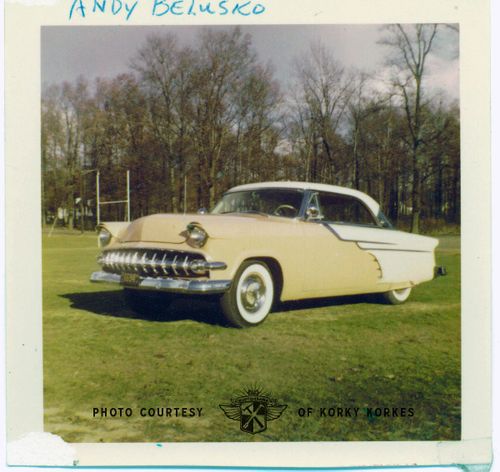 A photo of Andy Belusko's 1954 Ford that Korky restyled. Andy worked at the post office in Whippany, and he was a fellow member of the Free Wheelers of Whippany car club. Korky sold the original engine from his Parisienne custom to Andy, a full race 312 1956 Ford Thunderbird engine that Dick DiBiasse had built. Photo courtesy of Richard Korkes. 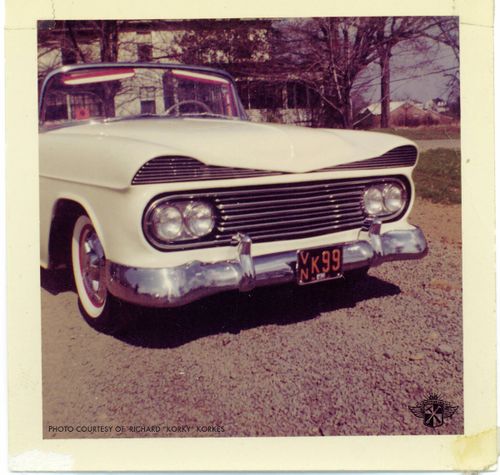 This photo from the Richard Korkes Photo Collection shows the front of George Pillion's 1955 Chevrolet Convertible. George was also from Whippany, New Jersey, and his custom creation, named "The Sportsman", featured custom bodywork by Korky. The frontal area on George's Chevrolet was heavily restyled featuring two scoops above the grille. The grille was fit with a pair of 1958 Edsel headlights. Four fins were grafted onto the rear of the car. The frame was C'd, and the car lowered front and back. George's Chevrolet was displayed at the 1960 Hartford Autorama with three other Korky customs. Photo courtesy of Richard Korkes. 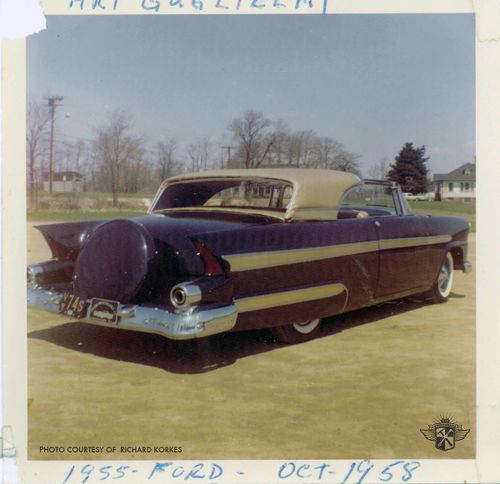 This photo from the Richard Korkes Photo Collection, dated October 1958, shows Art Guglielmi's 1955 Ford Victoria. Both Art and Korky was from Whippany, New Jersey, and they were both members of the Free Wheelers of Whippany car club that Korky had started. Art was the Vice President, and his Victoria was restyled by the President at his shop Korky's Kustom Shop. Photo courtesy of Richard Korkes.

Richard "Korky" Korkes is a legendary East Coast customizer. He was born April 1, 1935 in Whippany, New Jersey. Korky's dad was a union carpenter and was very knowledgeable when it came to cars. According to Korky, his dad showed him much of what he knew when he started his customizing career.[1]

Korky attended and graduated from Morristown, New Jersey high school. He went on to engineering college but his love of cars and his ability to customize replaced the goal of completing his studies. Korky's first car was a 1946 Ford convertible. He got the car at age 17 in 1952. Naturally Korky could not leave the car alone and soon it had a full race engine, two speed rear end and other Korky improvements including a metallic blue paint job. Korky admits he did not paint the car himself as he was just learning how to paint. Korky attributes much of his inital car knowledge to his father Joseph Korkes and tells us that he then learned much of his craft on his own.[1]

Korky's second car, at age 19, was a brand new red 1954 Ford convertible. Korky was more into customizing by then, and the brand new Ford evolved into the Parisian. The Parisian is one of the most famous cars of its day and won many car shows on the east coast. About the same time Korky created the Free Wheelers of Whippany car club.[1]

At the age of 28 Korky built a futuristic bubble top Jaguar for Bobby Freedman. The car was instantly famous and won many major car shows. So famous became the car, that George Barris of Barris Kustoms wanted to tap into Korky's talants and solicited Korky to work in California. Korky decided to come to California and go to work for George Barris in about 1963 as his shop foreman. Korky solicited Bobby Freedman, the owner of the bubble top jag to pay his way out to California. He packed up the Parisian hooked up a tow hitch, rented a uhaul, loaded the bubble top Jaguar and headed to California with a employee and friend named the "Greek".[1]

As shop foreman at Barris Kustoms Korky was in charge of the cars that were built. George was the promotor and constantly on the road while Korky ran the shop, solved completion issues, and made certain the cars were finished on time. Among the celebritiess that Korky built cars for both at Barris and at his own shop include: Elvis Presley, Frank Sinatra, Dean Martin, Bob Hope, Farrah Fawcett, Marvin Gaye, Jermaine Jackson, Tom Daniels, Harry Bradley, Reverend Ike, Bernie Cornfeld, Cher, Doug Rose, Canned Heat and many more.[1]

Please get in touch with us at mail@kustomrama.com if you have additional information or photos to share about The Richard Korkes Photo Collection.