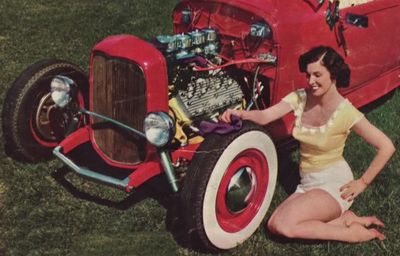 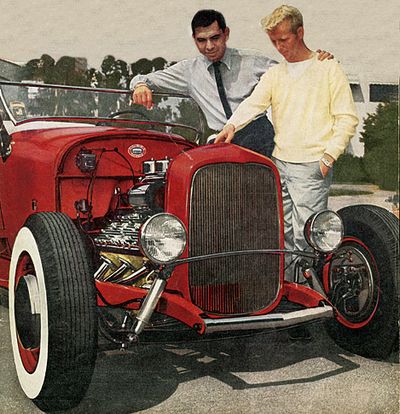 The "Dragnet Roadster". Note the Barris Kustoms crests and sticker on the windshield. 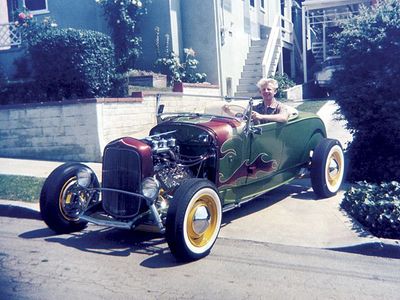 The car as it looked after George Barris painted it.

At the Compton Drive-In. Photo by George Barris 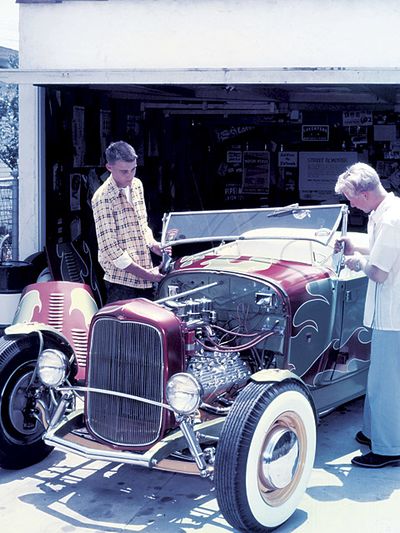 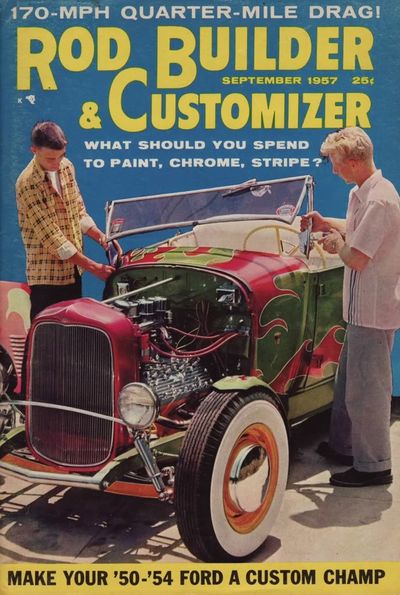 The roadster on the cover of Rod Builder & Customizer September 1957. 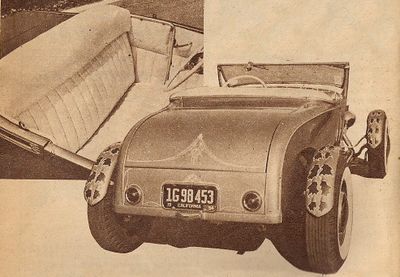 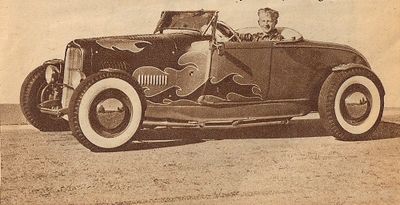 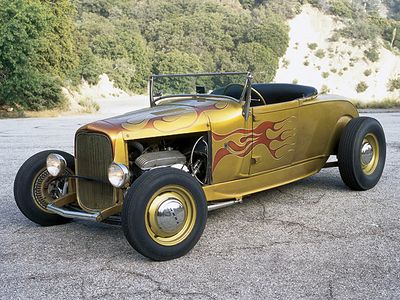 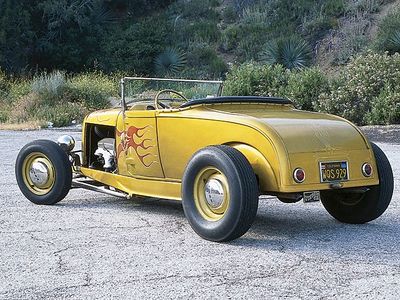 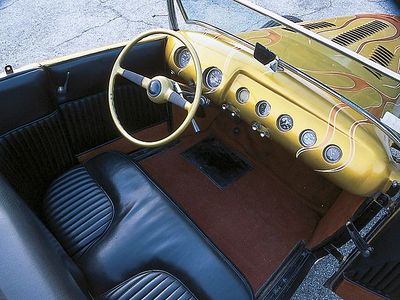 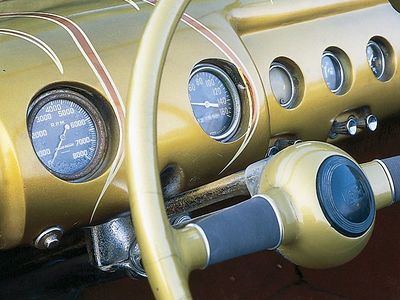 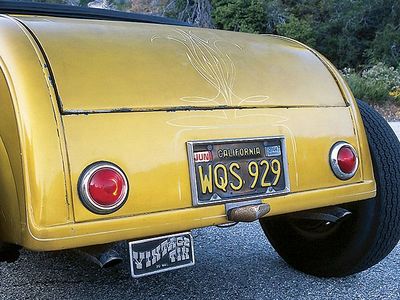 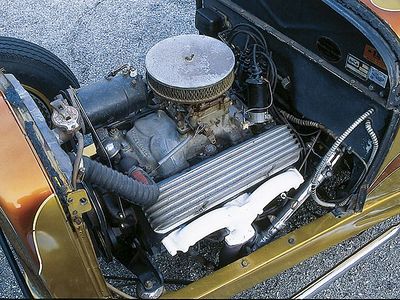 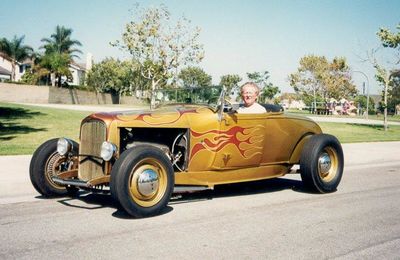 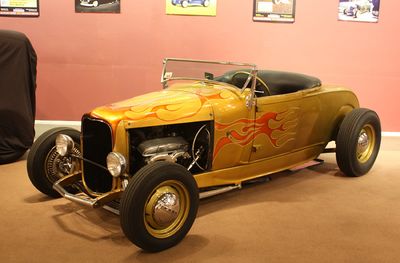 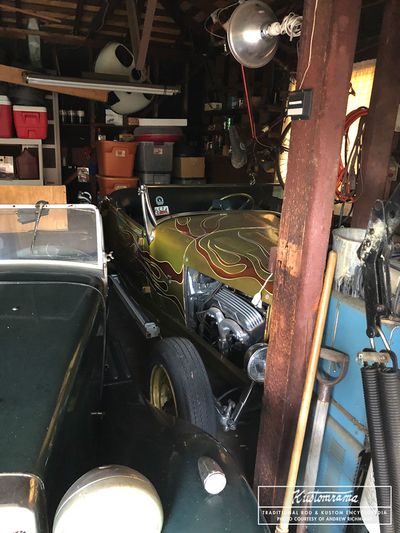 A photo of the roadster as it sat in September of 2019. Still owned by Richard Loe, the old hot rod was living in a dry garage next to a MG and a Thunderird at the time. Photo courtesy of Andrew Richmond. 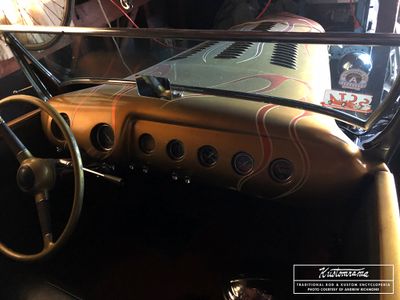 1929 Ford Model A Roadster originally owned and built by East Los Angeles Vultures member Kazar "Cozy" Simonian. With an urge for a V8 roadster, Cozy started working with his father on a garbage truck saving up money so he could buy parts. Cozy started his build around 1947, by buying a 1932 Ford chassis that he had Ruben Miranda fill for him. The front of the car was then lowered by installing a stretched and dropped axle from Bell Auto Parts. Ruben welded shock bungs to the axle, and split a 1941 - 1948 Ford front wishbone that he mounted to the framerails. The stock springs and an inverted main leaf were used to suspend the car. Cozy also had Ruben make him a V-shaped spreader-bar with ends that curled over the bar and mimicked the frame's boxed shape. Cook's Machine Works of Los Angeles shortened the driveshaft which was connected to a 1940 Ford rear end. The steering box was from a 1940 Ford as well. A 1929 Ford roadster body was located and Ruben cut out the tank's bottom before the body was installed. George Karabedian fabricated smooth rear wheelwells, Z'd the frame, made the trunk floor and faired the door hinges on the roadster. He also sectioned, peaked and filled a 1932 Ford grille for the car, installed 1948 Pontiac taillights and installed a filled 1940 Ford dash. Tunneled Stewart-Warner gauges were installed across the dash's face. 1927 Ford Model T Roadster windshield posts were made to work with the 1940 Ford dash. Cozy found an aluminum tank for the trunk that he had welded up in Boyle Heights. The roadster was powered by a Ford Flathead V8 that he had hooked to a 1940 Ford transmission with a 25 tooth Lincoln Zephyr gear set. Tony Faucetta souped up the engine with Evans two-carb manifold and high-compression heads. Fellow club member Jim DeLayo custom made the headers for the roadster. Jim also sold Cozy a set of chrome wheels. According to Cozy, the wheels set him back a full paycheck. After mounting the wheels, Cozy tore the car apart and chromed every nut, bolts and washer on it. John's Auto Top Shop in Montebello, California upholstered the car in eggshell white vinyl for $60. Back together again, fellow Vultures member Al Ayala of the Ayala Brothers painted the roadster "Cherry Coke", really opalescent red-brown with a lot of metallic.[1]

After completing the car, Cozy fell on hard times financially and needed money. Since all his paychecks had gone into the car, he was forced to sell the roadster in 1953. Tom Pollard of Monterey Park, Los Angeles, California bought the car from Cozy. Tom bought it without the engine, and installed a Ford Flathead 59L which Tom Lewis had bored 5/16" over and stroked by 3/8" to bring the displacement up to 296 inches, an increase of 75 cubes.[1] The engine was further hopped up by adding Edelbrock 10:1 heads, an intake manifold that sported three Stromberg 97's, a 400 camshaft and a magneto from Harman & Collins. Custom headers made by Sonny's Muffler Shop took care of the exhaust.[3] The chrome wheels were replaced by solid 15 inch wheels that where fit with 5.90-15 whitewalls in front and a set of 6.70-15 whites in the rear which were "slicked" by Inglewood Tires. Later shots of the car shows that Tom alternated between the solid wheels with bullet caps, and 1950 Mercury wheels and caps. The roadster was given a new paint job, and and was painted 1954 Pontiac red by friend Ruby Rubalacaba's father. This version of the car was featured on the cover of Rod & Custom August 1954. After restyling the car, Tom entered the car in a show at Cantwell Sacred Heart of Mary High School in East L.A. George Barris judged the show and gave Tom a first place. George set Tom in touch with Hot Rod Magazine editor Wally Parks who had a soft spot for red V8-powered As. At the time Wally was currently in the middle of a cross-platform promotional with NBC's Dragnet and was looking for a car he could use on a special Dragnet front page for his magazine. Tom Pollard, Dragnet's Jack Webb and Tom's roadster appeared on the cover of Hot Rod Magazine January 1955 with the slug "Dragnet's BIG ROD" placed prominently above Tom's picture. The car was only used on the cover and didn't appear inside the magazine or in any episodes of the Dragnet TV show. Before appearing on the cover of Hot Rod Magazine George was able to put Barris Kustoms badges on the cowl of the car in order to promote his business. After the photo shoot George Barris himself offered to repaint the car. Tom had recently painted it and said "No way". But George only wanted $60 for the job, [1] so Tom could not refuse the offer. The red was an enamel, and Barris wanted to use Lacquer, so Tom had to sandblast the whole car. The body was painted in lime gold with bronze flames.[3] George also talked Tom into a three-piece louvered hood and cycle fenders. After painting the car, Tom commissioned John's Top Shop to redo the eggshell-white interior trim. Striping was done by Von Dutch at the 1954 Los Angeles Autorama. While striping the car Von Dutch found that some Coffin Cheater club members called Tom "Raton Blanco" which is spanish for "White Rat", so Von Dutch decided to paint a white rat on the passenger side dash.[1]

Tired of being stopped each time he took his roadster out for a spin, Tom ended up selling it to Tim Miller in 1963. In 1967 the roadster caught fire, and was repainted in gold with bronze flames the following year. The flame and smoke damaged upholstery was replaced by black tuck & roll and the flat motor was replaced by a 283 Chevrolet smallblock. Tim kept the original 1940 Ford transmission, but replaced the brakes with Kinmont disc brakes.[1]

In 1968, Vintage Tin member Richard Loe of La Canada, California found the car sitting beside a service station. He immediately fell in love with the car and tracked down the owner hoping to buy the car from him. Tim Miller, who still owned the car refused to sell it. Four years later Tim decided to sell the car to Richard. Two years later, in 1974, Richard sold the car due to a growing family in need of a bigger house. He sold the roadster to a neighbor who lived just down the street. Richard regretted selling it and tried to buy it back a few months later without any luck. In 1977 Pete Eastwood told Richard that his old roadster had recently been in shop. As it turned out, the roadster had changed hands a couple of times, and the louvered hood and fenders were replaced and the originals lost. Richard was finally able to buy the car back and the roadster is still in his possession. Richard plans to restore the car, but has yet not decided what incarnation of the car he should restore it back to.[1]

Please get in touch with us at mail@kustomrama.com if you have additional information or photos to share about Kazar Simonian's 1929 Ford.