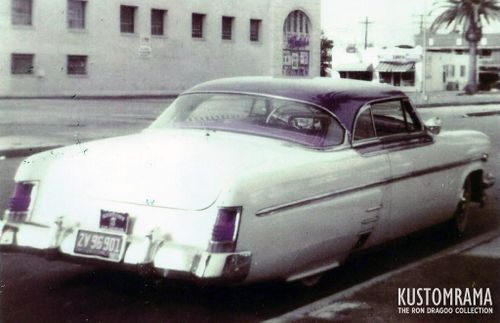 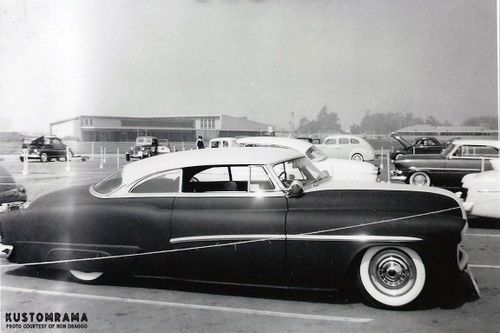 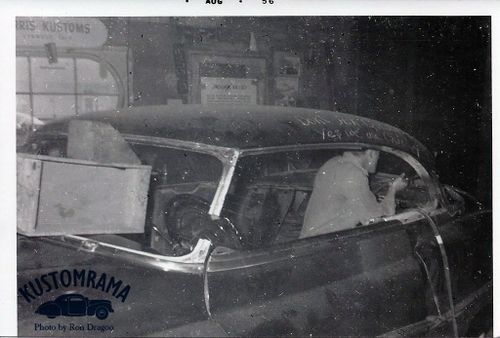 A construction photo of Lyle Lake's 1952 Buick Riviera, the Blue Danube, taken at Barris Kustoms in August of 1956. In the photo Lyle can be seen with a torch in the back of the car. The A-pillars are cut, and Lyle and Sam Barris is working on the 6 inch chop in the rear. Lyle was from Orlando, Florida, but in the summer of 1956 Junior Conway remembers him working on and off at Barris Kustoms. Photo by Ron Dragoo, provided by Bill Layman. 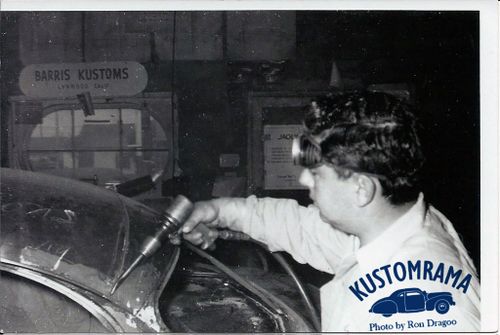 A photo of Sam Barris using an air chisel to cut the roof over the rear window on Lyle Lake's 1952 Buick in August of 1956. Photo by Ron Dragoo, provided by Bill Layman. 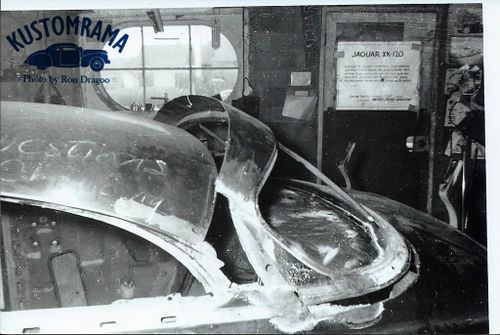 Another progress shot of Lyle Lake's 1952 Buick taken in August of 1956. According to Trend Book 143 Restyle Your Car the top on Lyle's Buick featured a three inch chop in the front and a six-inch chop in the rear. The rear window was reformed and tilted forward to give the car a low slant line. Once completed, Lyle's Buick entered the history books as the Blue Danube. Photo by Ron Dragoo, provided by Bill Layman. 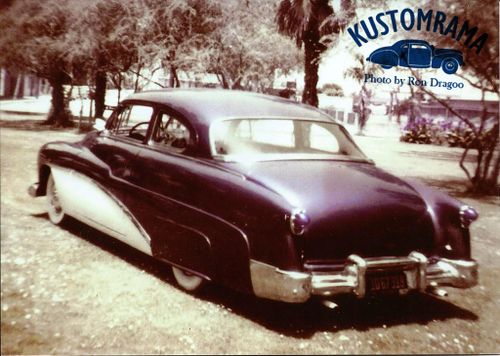 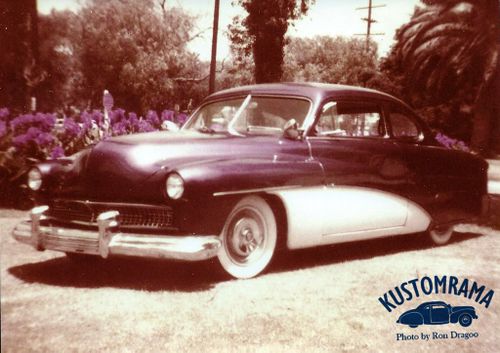 A photo of the 1951 Mercury that Ron traded Dick "Peep" Jackson for his customized 1954 Mercury. Ron had to pay some extra cash in between as well in order to get his dream car. Ron's '51 Merc was nosed, decked and shaved for door handles. The hood corners were rounded, the headlights were frenched, and the stock grille was replaced with a 1955 Ford unit. What seems to be 1955 Buick sidetrim divided a two-tone paint job. The rear quarter panels were massaged to accept a pair of Oldsmobile taillights. Photo by Ron Dragoo, provided by Bill Layman. 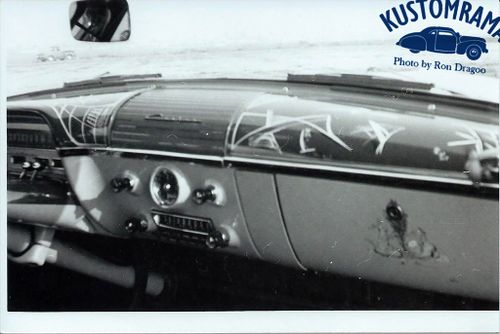 The dash in Ron Dragoo's 1954 Mercury was pinstriped by the master himself, Von Dutch. Photo by Ron Dragoo, provided by Bill Layman. 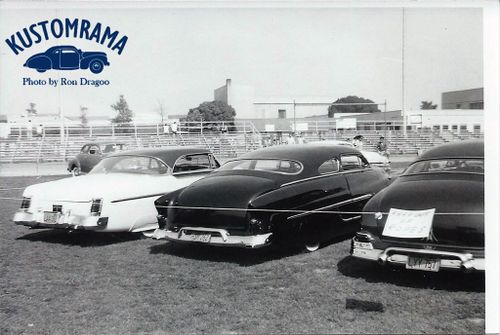 "Keep out of ropes". Another photo of Ron's Merc at an outdoor car show. Buddy Alcorn's 1950 Mercury and Louie Bettancourt's 1949 Mercury are parked next to Ron's Merc in the photo. Two Ayala restyled Mercs that both got an overhaul by Barris Kustoms in the 1950s. Photo by Ron Dragoo, provided by Bill Layman. 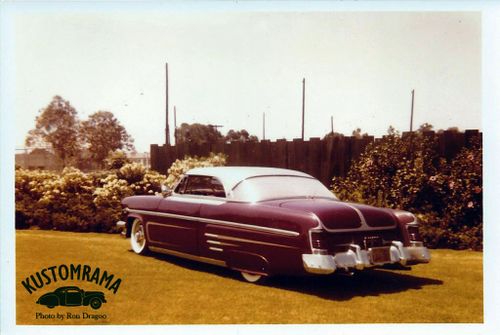 A rearview shot of the scalloped version of the Dragoo Merc. Photo by Ron Dragoo, provided by Bill Layman. 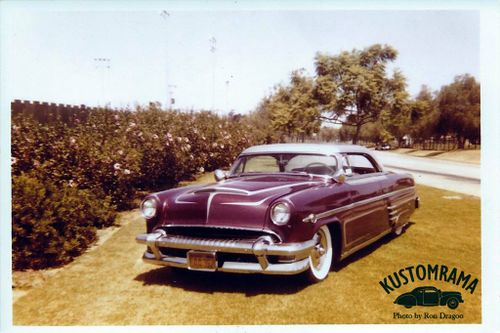 A rare photo of the scalloped version of Ron Dragoo's 1954 Mercury. Sometime after Ron purchased the Merc from Dick Jackson, he had Dick repaint the car for him. Ron told Bill Layman that he took the car to Dick and gave him a free hand as to the color. There was no discussion about doing the scallops, so when he picked it up he was surprised and shocked to see that Dick had added the scallops. He wasn't very happy at first, but learned to like them after a while. Photo by Ron Dragoo, provided by Bill Layman. 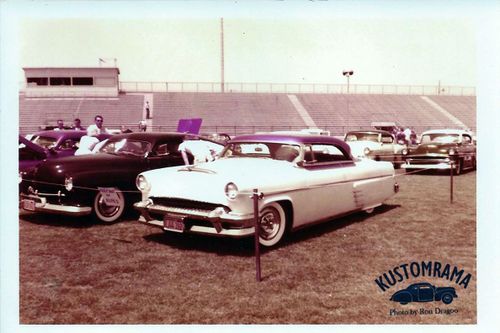 A photo of Ron's Mercury at an outdoor car show in the 1950s. Ron's Merc was originally owned and restyled by Dick Jackson. During the build, Ron spotted the Merc on the street, and he decided that he had to have it... In this photo, the Merc is parked next to Buddy Alcorn's 1950 Mercury and Louie Bettancourt's 1949 Mercury. Glenn Springer's 1954 Chevrolet Bel Air can be seen in the background. Photo by Ron Dragoo, provided by Bill Layman.

After building a tribute build to Duane Steck's 1954 Chevrolet, and restoring Fred Rowe's 1951 Mercury convertible, an old Barris Kustom, Bill Layman of Bethel Park, Pennsylvania decided in the 2000s to restyle a 1954 Mercury. Inspiration for the build came from the Dick Jakson-Ron Dragoo Mercury. The build was completed in 2005. In 2006 The Rodder's Journal ran a featured story on the Merc in The Rodder's Journal 31. Ron Dragoo saw the story about Bill's Mercury, and decided to contact Bill. Ron sent Bill photos of the car as it sat while he owned it, along with some other interesting photos he had taken back in the days. Unfortunately Ron passed away in 2012, but Bill has decided to share Ron's photos with Kustomrama.

Please get in touch with us at mail@kustomrama.com if you have additional information or photos to share about The Ron Dragoo Photo Collection.