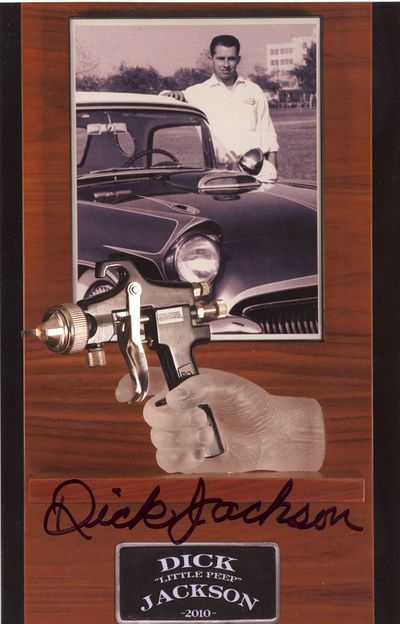 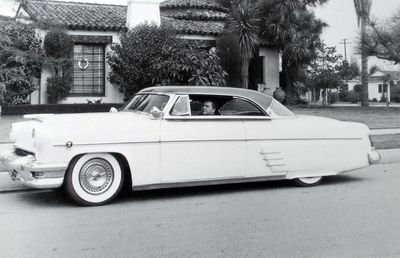 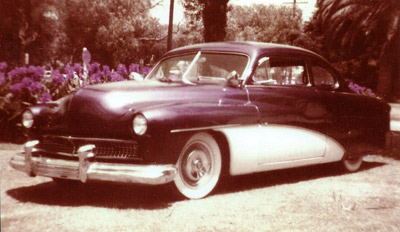 Ron Dragoo's 1951 Mercury coupe of Long Beach, California was restyled around 1955. Dick got Ron's Merc in trade, plus cash, for his 1954 Mercury. 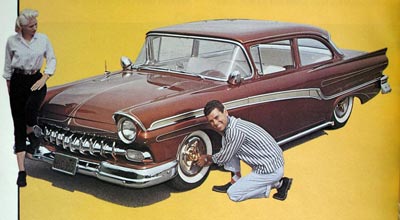 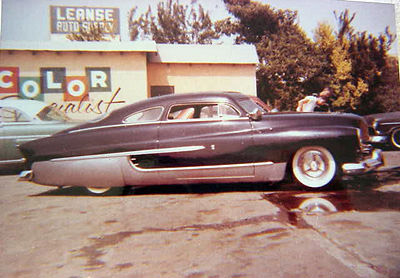 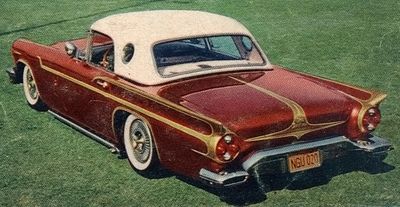 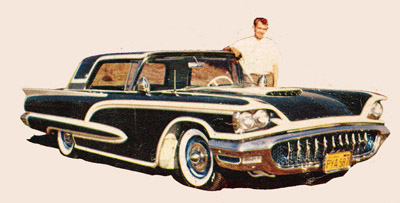 Dick Jackson's 1958 Ford Thunderbird was restyled in 1958. The car was later sold to Calvin Wiekamp.

Dick "Peep" Jackson was born in Long Beach, California in 1935. He grew up in Lynwood, and began hanging around the Barris Kustoms shop at age 14, in 1949. He had a Whizzer bike, and used to stop by the shop everyday on the way home from school. A rope kept visitors out of the shop, so the workers would not be disturbed by curious by-passers. Dick used to stand outside the rope and stare into the shop. One day Sam said "Hey, we're getting tired of you staring at us. You want a job here?" At the time the Manok brothers, John Manok and Ralph Manok, worked there along with Bill Ortega and Sam and George. Dick said yes, and he started to sweep the floors. He was told not to sweep any tools or parts. Dick wasn't paid, but he felt lucky to be on the other side of the rope. While working at the shop George gave Dick the nickname "Peep", telling him "you're only a peep". After six months Sam told Dick that he was doing a good job, and that they were going to start paying him 22 cents an hour. He took parts off, put parts to be used in one pile, other parts in the shed up front, and on the other side. Peep advanced from being a broom boy to becoming the spotlight guy. When George got tired of installing spotlights, he passed the task on to Dick[1]

Dick was still going to school. He had a paper route in the morning, and lived at home. He was learning at the shop. He became good friends with Sam, who told him more what to do then George, and he was even his babysitter when he and his wife wanted to go to a show. Dick would watch the two kids as a favor, and Sam would do favors for Dick. Dick's first car was a 1939 Chevrolet sedan, pretty, clean and stock car. The first thing Sam told Dick was that he had to put some primer spots on it to make it look like it belonged at the shop. Next he came in and gave Dick a full set of Cadillac Sombreros, telling Dick that he needed those. They found a way to screw them on before Sam told Dick that they had to lower the car. Sam gave Dick blocks for the back and they figured how to lower the knee action in front. Finally he came in with a new set of original teardrop skirts for the car. At the time Sam was teaching Dick how to sand and mask. They were taking him through phases, and Dick did a lot of block sanding on the Hirohata Merc. The first thing he ever painted on a car was the dashboard and steering column on Bob Hirohata's 1951 Mercury. By 1952 he was learning how to weld. George had strict rules, and one of these was that all seams had to be fully welded or brazed, not tacked, before leading, so they wouldn't crack later. Back then they did most everything in brazing, and the welding they did was done with coat hangers as the metal was softer and it flowed easier, almost like lead.[2]

Working at Barris Kustoms, Dick had the chance to hang out with his heroes such as Johnny Zaro, Jesse Lopez, Bob Hirohata, Frank Monteleone and Nick Matranga. Being employed at Barris Kustoms made you stand pretty tall with your high school buddies. Not only did Dick hang out with these cool guys, he were also able to drive their custom cars. While Sam Barris' 1949 Mercury was under construction, Sam would sometimes say, "Take it to school if you want to go look for girls."[3]

As Dick Jackson started making more money he bought a 1952 Ford. He started working on it in the shop, and he remembers that you could always work on your own car in the shop after hours. Everybody did. Sometimes on Saturday, payday, George would be short of money, and he told Dick that they were even as he had used some primer and some paper. If George wouldn't pay him, and he was short of money that week, he would go work somewhere else. If Sam heard about it, that he had been working for George Cerny at Cerny's Custom Shop, he would get in Dick's face and kick him out, telling him not to work for the competition. "You are loyal to us" Sam told him. Both Sam and George had a temper. Sam wasn't quite as bad as George. Dick remembers that if you heard George started cussin' and yellin', everybody in the shop would duck for the floor. In the mid 1950s, Dick started working other places as well. He would work for shops that paid better, then come back at night and work but take it out in trade for working on his own car. When he finally was the head painter at Barris Kustoms, full time, he had around $2.45 an hour. This was just before the fire, in 1957. He had his 1957 Thunderbird then. He left Barris not long after the fire , in 1958, to start his own shop, a body shop and custom car studio called Dick's Paint and Body Studio in Compton. Dick was typical of most employees at Barris at the time, both in coming and going and working after hours or part time.[2]

In 1957 Dick bought a brand new 1957 Ford that he customized. Later the same year he traded the Ford to Buddy Alcorn for his chopped 1950 Mercury. He updated the Merc with a pinstriped two-tone paint scheme, dual spotlights nd Oldsmobile Fiesta hubcaps before he sold it to buy a 1957 Ford Thunderbird.[3]

Dick was the inventor of fake spotlights, or "dummy spots". He acquired a set of real Appleton spotlights from a wrecked custom. The shafts were broken, however the mounting base was still intact. From this, Dick got an idea to use them on a car without drilling the hole for the shaft, but only mounting just the spotlights. He sold the rights to Alex Kraus of Cal Custom for $100.[4] Another design Dick sold to Cal Custom was the Sattel-Lites for 1957 Ford's. The Sattel-Lites were based on the lights Dick made for his Thunderbird. Dick got another $100 for the design, and Alex Kraus produced and sold hundreds of sets.[3]

In the seventies, Compton was taken over by hoodlums and colored people, which established gangs and hoods in the area. They burned down Dick's shop in the year of 1977. Dick moved further up north to Tehachapi, California. Here he opened up Dick's Paint & Body Studio.[5]

Please get in touch with us at mail@kustomrama.com if you have additional information or photos to share about Dick Jackson.