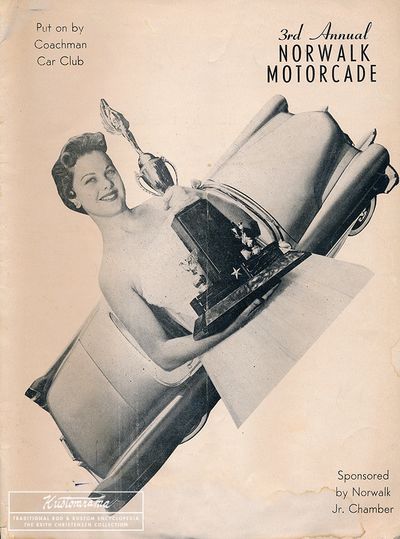 The Souvenir Program for the 1956 Norwalk Motorcade. Scan from The Keith Christensen Collection. 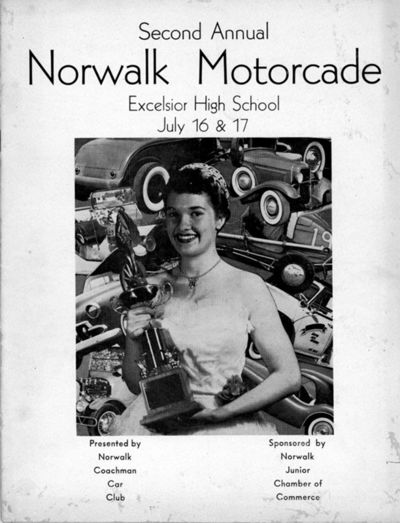 The Norwalk Motorcade was an outdoor car show sponsored by the Norwalk Coachmen Car Club. Because of the connection to the Norwalk club, it is also known as "The Coachman Show."[1]

The idea of the first annual Motorcade was conceived in July of 1954 at a joint meeting of the Coachmen, Jr. Chamber of Commerce, Sgt. Louis Casullo, Los Angeles County Sheriff's Department, Norwalk Centours Motorcycle Club and interested parents. According to the Souvenir Program for the third annual Motorcade in 1956 "the teenagers wanted a chance to display results of their labor and prove the worth and need of organized clubs with proper adult supervision." The ball started rolling, committees were formed, plans were made and the Junior Chamber volunteered to sponsor the show.

The first Annual Norwalk Motorcade was held in 1954 at Excelsior High School in Norwalk, California. President and founder of the Coachmen, Keith Christensen was the Director of the show.

The third annual Norwalk Motorcade was held July 22 and 23, 1956 at Excelsior High School. According to Larry Watson 22 pinstriped cars were entered in the show. Von Dutch had four of those, Dean Jeffries had seven, and Larry Watson had eleven.

The second annual Norwalk Motorcade was held July 16 & 17 at the Excelsior High School.

The first Norwalk Motorcade was held August 28 and 29, 1954 at Excelsior High School.

Please get in touch with us at mail@kustomrama.com if you have additional information or photos to share about Norwalk Motorcade.