From Kustomrama
(Redirected from Candy)
Jump to: navigation, search 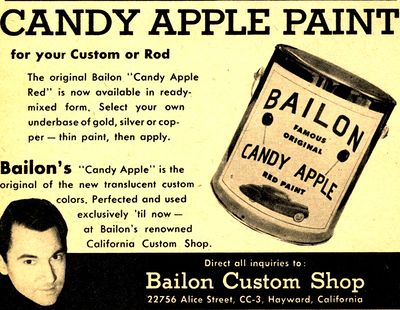 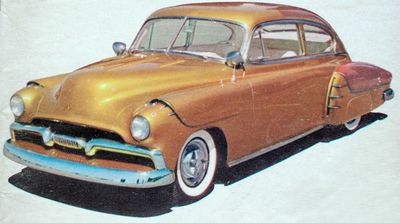 Ted Leventhal's 1950 Chevrolet Convertible of Oakland, California was restyled by Emory Robinson's Custom Shop in 1955. Painted in a green iridescent lacquer by Mel Pinoli's Body and Paint Shop, Ted's Chevrolet is known as the first car ever to receive a Candy paint job. 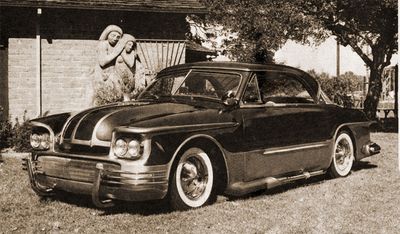 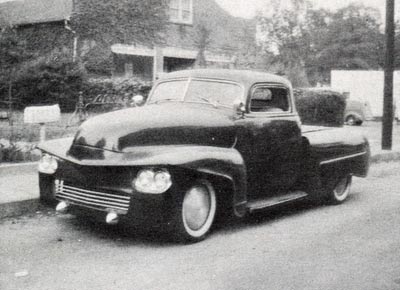 Jim and George Bernardo's 1948 GMC Pickup of Milford, Connecticut. Jim and George ran Bernardo Auto Body in Milford, and the truck acted as rolling advertisement and parts hauler for the shop. The build was completed around 1958 - 1959, featuring a Candy Red paint job. 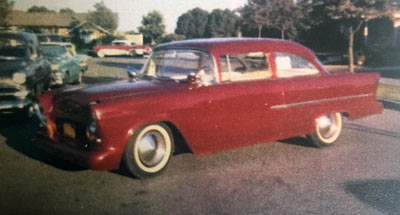 John McLaughlin's 1955 Chevrolet of Sapulpa, Oklahoma. In the late 1950s Jim sent the car on a train from Oklahoma to Barris Kustoms in California to have they finish the build and paint it. The car was supposedy given a Candy Red paint job by George Barris himself. 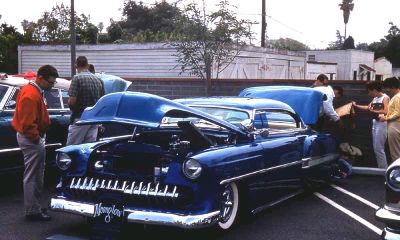 Duane Steck's 1954 Chevrolet Bel-Air of Lakewood, California. Duane was a member of the Long Beach Renegades car club, and his Chevrolet was well known around town as The Moonglow. Larry Watson painted the car at least three times, and in 1959 he gave it a Candy Blue paint job. A sparkling Silver Pearl was used as base color, and according to Larry, it was his best candy blue paint-job ever. 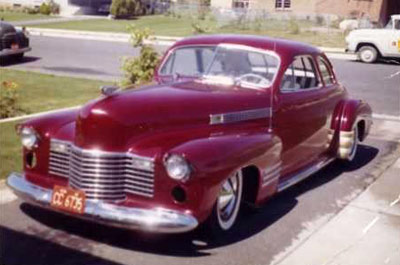 Ray McMullin's 1941 Cadillac Coupe. Ray lived in the Ogden area in Utah. He was a member of the Stags of Ogden car club, and fellow club member Mickey Ellis believes he gave the coupe a Candy Red paint job circa 1959-1960. 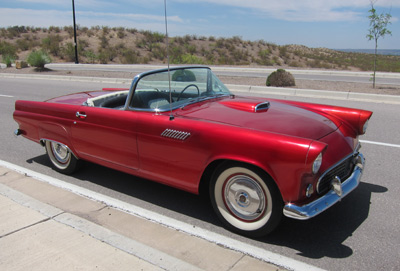 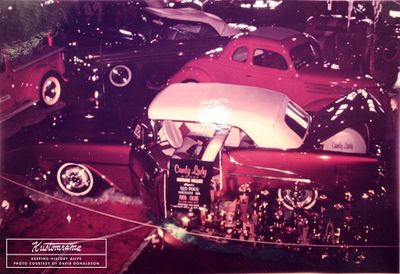 Herman Miller's 1955 Oldsmobile of Vancouver, Washington. Miller was a member of the Slo Poks of Vancouver car club. By 1959 the car had been painted Candy Apple Red, and it was known as the "Candy Lady." 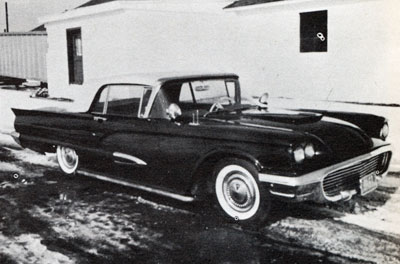 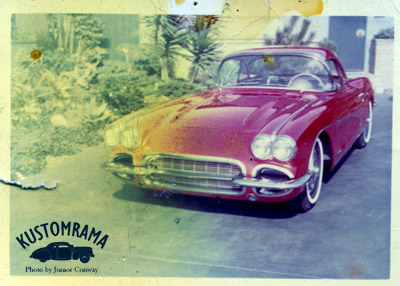 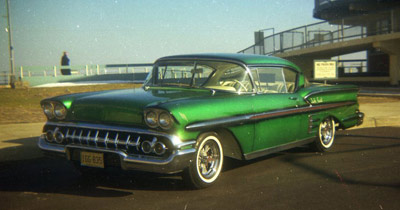 Rich Wroblewski's 1958 Chevrolet Impala of Neptune City, New Jersey. Rich was a member of the Haulin' Gents car club, and his Impala was restyled by fellow club member Terry Browning in the early 1960s. It was shown and known as the "Jade East," and it featured a beautiful Candy Green paint job by Terry.

Many people were experimenting with paint in the 1950s, trying to achieve a candy effect. Amongst them were known painters and customizers such as Joe Bailon and Mel Pinoli. In 1953 Buick came up with a color named Titian Red for its 1954 model. The Titian Red became a very popular color at the time, and was widely used on many mid and late 1950s custom cars. The color was as close to a candy color you could come before real candys were being done. The color was very transparent and it could be affected by what was used as a base color underneath it.[1]

In the mid 1950s Mel Pinoli of Pinoli's Body and Paint Shop was experimenting with translucent colors, trying to find the secret to what would eventually be called Candy Apple. He combined different amounts of toner and clear, but the results weren't very good. On his way to achieve the look he also tried to paint Frank Livingston's 1949 Chevrolet with printing dyes from California Ink. The effect was good, but the paint faded fast and badly. He knew that the ink weren't the answer so he went back to the toners. Eventually, he hit upon a combination of toner and color that worked. In 1955 Mel laid what is known as the first Candy Apple paint job. The car was a 1950 Chevrolet belonging to Ted Leventhal. At the time the paint was applied it was called green iridescent lacquer. Joe Bailon is often credited as being the first to apply candy paint. He may have been the first to apply candy red, but Pinoli was responsible for the first candy paint job.[2]

At young age, Joe Bailon was impressed with the golden maroon sunset over the San Francisco Bay. He was so impressed in fact that red became his favorite color. When he later began mixing paints, he tried to achieve a color that was similar to that of a car's taillight reflected on a rainy street; real brilliant, almost with a glow from deep within itself. He experimented with various ideas for a long time. His work lead into what became known as candy apple colors. Candy Apple Red was ofcourse the first. What he wound up with after a lot of experimenting was a red-toned clear lacquer sprayed over a bright red dye, not a paint, which, in turn, had been put over a gold underbase. After inventing the paint Joe marketed the paint in several shades for a while. Candy Apple wasn't any tangible product, but a method of application, so once a shop had ordered Joe's paint and read the instructions for applying it they could go right ahead and paint hundreds of cars without buying a drop of paint from Joe. Before the Candy Apple came along Joe had tried to duplicate the coloring on the sides of a set of Slingerland or Ludwig drums. That rich, flaky, transparent color that is actually a sheeting of molded plastic. The sparkle in the stuff was given off by light rays reflecting from the facets of minute silvery particles. He tried to match this by mixing salt into certain paints, and got a fair result. The he hit upon adding the silver flakes that people sprinkle on Christmas trees. He had to rework a spray gun to get it through the nozzle. The car he used it on turned out real well. It was after this that he came up with Candy Apple. Candy Apple became such a success that he forgot about the flake-like paint. Then before he knew it someone else came along and "discovered" Metalflake.[3]

Please get in touch with us at mail@kustomrama.com if you have additional information or photos to share about Candy Paint.